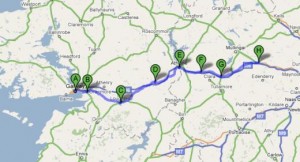 I’m not quite sure where the idea of cycling across Ireland came to me from, but it’s been embedding somewhere in my mind since I splashed out on a nice bike a good few months ago, along with a few other trips I have in mind. Heading off the day after our failed attempt on Mweelrea (see last blog) was probably a bit silly, in hindsight, and I’m certainly suffering for it now. Then again, combining the two brought a nice extra sense of achievement, too. I did make it back to Dublin in one piece, so in a way that made up for failing on the hills. Anyhow, here’s how it went down:

I left Galway early on Monday morning, aiming to get to at least Athlone, and preferably the town of Moate, which is almost exactly half way between Galway and Dublin. I took a short detour on the way down to eye the Atlantic Ocean (if you’re going to go coast to coast, you have to actually see the sea, right?), and then headed off towards Lough Rea along the N6. The route between Dublin and Galway on a bike is pretty simple: the old main road goes most of the way.

The countryside in the west of Ireland is really gorgeous. Since the N6 has been replaced by a motorway, it’s almost empty and most parts have an ‘overtaking’ lane (in Ireland that’s on the inside, and cars move over to be passed) which makes for the perfect place to cycle undisturbed. The roads in the west are surrounded by those tiny ‘paddock’ style farms, none of which seem to have knocked down the old brick walls in the way that’s normally done to bring in modern farming devices and save time. It looks far better that way, especially when the farms merge into huge boggy wastelands.

There are plenty of nice towns on the route, though the level of ‘quaint’ is sometimes overwhelming. One town on the road, for example, still displays a sign at its entrance that reads ‘Ireland’s tidiest town 1969’… erm, congratulations? Ballinasloe is beautiful in a kind of disjointed, rugged way, and Lough Rea’s road signs in amongst the crumbling old buildings (plenty of holes in roofs) are brilliant – places like ‘frogs beach’ plastered everywhere.

I’m not sure what the deal is with road signs in Irish towns. I’m convinced that information is somehow passed down through generations, with the secret of how to actually leave the town (let alone in the right direction) passed down over candlelit dinners, never to be repeated. Roads arrive in small towns, disappear into a mire of tiny walled backstreets with no signposts whatsoever, and then emerge out of the other side in several different directions, also un-signposted. In fact, the only way I’ve found to actually cycle through an irish village is to stop and ask people which way to go. Amazing for a supposedly national (N) road.

Still, most of the journey was beautiful. I particularly liked Athlone, which was easily the biggest town on the route. It’s got a reputation as being a bit boring, but the sights are great – a really dingy looking medieval fort overlooking a real wide part of the River Shannon’s probably the highlight. I stopped there for lunch and just sat in a square ogling it all for half an hour and taking the weight off.

The original plan was to get to Moate, and then stop at the next B&B I found after that. According to the guidebook I got from the library for the trip, there used to be places to stay in nearly every town along the road, but it took an extra 45kms and half an hour of cycling in the absolute pitch black (with no lights) to actually find one. Presumably they’ve all shut down because of the recession, but the end result for me was an extremely painful extra 45kms into Kinnegad. The final part I spent diving into the embankment every time a car came along the road, as it was too dark for them to possibly see me. When I arrived I was totally plastered in what I hope was mud. All part of it, though!

155kms, a total time of about 9 hours (though I spent at least an hour of that asking around for B&Bs and another half hour eating) and some very sore legs. I’ll blog on the ride into Dublin tomorrow.

At least I should look decent in the wedding photos after days like this!