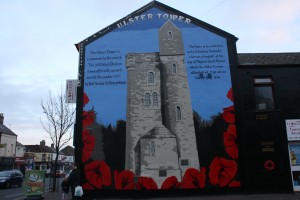 There are two pathways through Belfast’s Peace Wall, and they’re both closed several times a year, whenever tensions start to rise. The one I’ve chosen is open today, and unguarded: while I seem to be the only person on foot in the area, I can simply stroll through the barbed wire-topped, opaque blockades that separate the two communities, glancing at the dozen or so security cameras hovering over the scene and the lookout posts as I stroll through.

If it wasn’t for the fence, the exact dividing line between Shankill and The Falls Road district wouldn’t be at all clear. For a few hundred metres either side of this very physical separation marker, the political symbolism disappears, there’s barely a sign of life in the houses and some of the shops look like their signs date back about fifty years. They’re all boarded up, and off the main roads, there’s a lot of wasteland, rubble and wrecked buildings. Presumably, this district used to be the very core of the guerilla battles between the two communities, and while the Shankill side has a small industrial estate just inside the gateway, the token attempt at urban regeneration just looks out of place on such a blotted landscape. 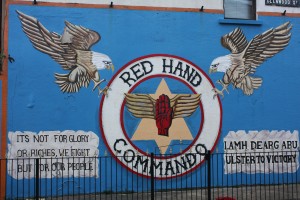 Before the symbolism starts, I stumble across a well-used area of wasteland, careful shielded from view by thrown-up corrugated iron blockers that shield the field inside from sight. The iron’s covered in recently painted graffiti saying things like “enter at your own risk” and “the bonfire will be lit Sunday at midnight, do not enter while the bonfire is lit”. Sure enough, though it’s a few hours before darkness on Sunday, there’s a huge plume of rubbery smoke rising from the patch of land, and a lot of noise coming from inside. While the situation’s almost certainly entirely unrelated, “bonfire” suddenly seems like a seriously imposing alternate name for something else that might stem from the burnt out cars and rubble.

I’m a little surprised, once I reach Shankill proper, to find a relatively run down yet fairly normal main road. First appearances are deceiving, though. You only have to walk a few metres down the road before stumbling upon some Unionist symbols. The first mural I come across is perhaps the most impressive: an entire house coated in poppies and extolling the achievements of an Ulster Scot regiment in World War I, together with a huge representation of a tower built in their honor that stands somewhere in Belgium. 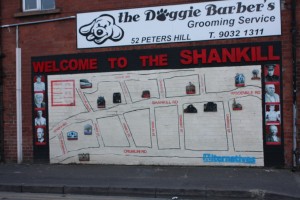 It soon becomes clear that Protestant/ Unionist symbolism revolves heavily around Ulster scot contributions to the British Empire. The First World War is remembered more thoroughly here than anywhere I’ve ever come across in the UK, in the form of quotes from ancient texts and historical references, one of the newest of which showed a picture of a group preparing for battle in Shankill in 1914. The caption read “preparing for battle in 1914, prepared for battle in 2004”. Other prominent symbols included abundant Union Jacks, the red fist of Ulster and countless references to the building of the Titanic in Belfast (accompanied by a favorite local expression, ‘she was fine when she left here’).

My impression, rightly or wrongly, was that the Shankill imagery was more grandiose and less politically desperate than that found on The Falls Road, which given the government has been London based for all of recent history is perhaps not a shock. There are the same saddening sights all around, though: the memorial to ‘innocent protestants murdered’; complete with a locked memorial garden; numerous pubs declaring loyalty to the Queen that you’d rarely find in London and, in the estates behind the main road, row after row of murals depicting ‘proud English soldiers’. One particularly prominent picture has signposts pointing in one direction to ‘Eire’ and ‘War’ and the opposite way to ‘United Kingdom’ and ‘Peace’. The directions even seem to be correct in reality. 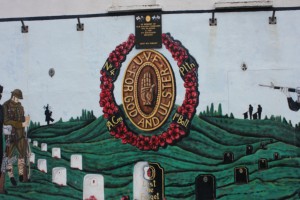 I don’t feel the same discomfort in Shankill. Perhaps it’s because I’m so clearly of English origin that I assume the locals won’t take against me. At the same time, I don’t want to be seen as a sympathizer: if anything, despite my background, I lean the other way, though clearly peace and reconciliation are the only routes forward. Outside the Glasgow Rangers supporters club – a team so universally despised in Ireland that it takes me a second to remember that most Protestants in Belfast are of Ulster Scot background, and not simply being contrary – a drunk guy came out of a pub and started asking me questions. At first he was being pretty aggressive, but as soon as he heard my English accent, he ran inside and came back out with a beer, which he just handed to me. I didn’t feel I should be drinking it – I didn’t really want to be lumped in with anyone – but I also felt that if I didn’t it might be seen as a snub, so I drank away. Lonely Planet’s suggestion on touring the area comes with a few health warnings, and in truth, friendly or not, I didn’t want to develop any kind of association with anyone around here. So I quickly finished my beer, said thanks and moved on.

When you come out of Shankill and back towards Belfast city centre, you pass a motorway that seems to mark the end of the division, simply stroll past the end of The Falls Road on the way back to the bus station and a perfectly normal surrounding town. I think I’ll file both Shankill and The Falls Road under ‘glad I’ve seen them, but just the once is enough’, and be grateful that I live in the Republic and so largely avoid the kind of politically motivated violence that still seems to bubble heavily under the surface. I also hope I’m never bought another beer based only on where I come from – race discrimination’s no better when it’s to your benefit.