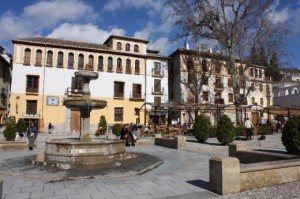 Spanish night out lesson number one: do not mix Sangria, beer, Mojitos, wine and assorted other cocktails that you wont remember drinking the next morning. It produces a hangover that a continental breakfast can’t even come close to sorting out (who came up with the idea of a continental breakfast, anyway? It’s basically a nice way of saying ‘very dull breakfast, very fractionally more impressive than toast and cereal. Possibly with free yogurt, as we know no one would ever want that for breakfast).

Where a continental breakfast fails, fortunately walking up a hill doesn’t. There can be few better ways to get over copious alcohol consumptions than wondering up a slope, and that’s exactly where Granada’s biggest tourist attraction is to be found. By the time we make it up there, of course, it’s lunch time: the fry up we should have had earlier, in a restaurant surrounded by legs of Serrano ham and string bags of ancient garlic. I love the literal translations on English menus found in tourist resorts – ‘fried sausage of blood’ and ‘cow foot in tomato’ cause no end of amusement. Why not call a spade a spade, I guess, though I don’t doubt someday I’ll stumble across a menu that also describes exactly how the meat was produced. Yum. 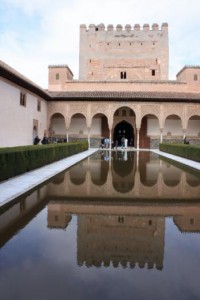 El Hambra, a sandstone cliff top castle overlooking Granada city doesn’t look much from a distance. At the bottom of the hill all you can really make you out the occasional turret and some well place arrow slots. Get to the top, however, and it really is something special, and perhaps another building to add to the ‘more impressive than the Taj Mahal’ list (sorry, I know that’s sacrilegious, but anywhere with as many dumbstruck tourists walking around it and as little to offer on top of the well known postcard view as the Taj is a mother of a disappointment).

In the summer you’d have to be up the hill in the early hours to get a ticket into the palace part of El Hambra, but in the off season we can get an entry time of ten minutes after arriving. A path leads through quite a maze of buildings, with every wall totally covered in intricate paneling and designs that must have taken years to put together. El Hambra is a beautiful maze of open-air courtyards and enclosed chambers, spreading across half the hillside before opening out into a manicured garden full of decorative pools and cannons.

The builders obviously had the same ideas about beauty as we did, having left stunning views across the old parts of the city and a beautiful stone staircase leading up to it all.

After El Hambra it was time to head on, a long drive across the Sierra Nevada back to Malaga and an early evening flight. I’d had some trouble with the cars clutch the night before, and arrived at the parking lot with a certain amount of fear that it just wouldn’t go, but everything was alright in the end, despite a bit of trouble in the lower gears. 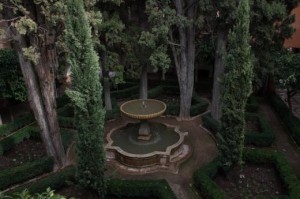 Driving back I was still more than a little hung over, and had to stop at the side of the road for coffee in a rest stop to stay awake all the way back to the airport, where we sat and munched on Olives until the plane arrived.

I’ve been suffering all week (sorry for the slow updates, I know one or two were waiting for them!), and though I loved Andalucía, traveling at pace is going to take some getting used to. Hiring a car is a great idea, apart from the fact that for the driver there’s no break, and I usually spend the journeys traveling. Great trip overall though, and very affordable hotels, car hire and flights. Not sure I’d go back during peak season, but I’d recommend off-season Andalucía to anyone. And we found our probably wedding location! 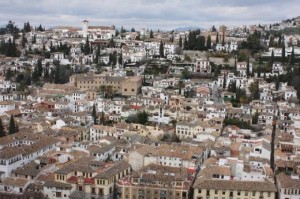 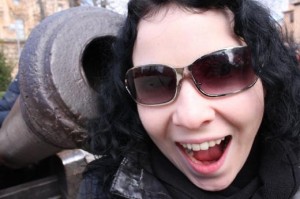