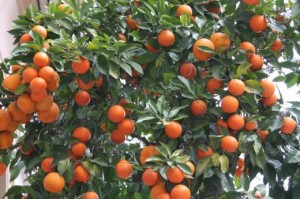 Seville, it has to be said, produces some of the best coffee I have ever tasted. After the liquor-laden beast of the night before, on Saturday morning we tracked down an ice cream infused mix that almost tempted us to stay in Seville a few more hours and put on a few kilos. The Seville to Granada drive, however, is a bit of a beast, so we settled on a quick stroll around the city, a picnic for the journey and cruising on.

Just half an hour in Seville is enough to throw up a few oddities. At the traffic lights a guy in a purple dress sang happily to himself. He seemed to be trying to sell something, but could equally have escaped from the local lunatic asylum. The Cristiano Ronaldo’s (see last entry!) have a staunch belief that a good way to spend a Saturday morning is standing in Seville’s graffiti addled back streets, chatting away tea in hand, and occasionally laughing raucously as one of their group is smacked on the head by a falling orange. 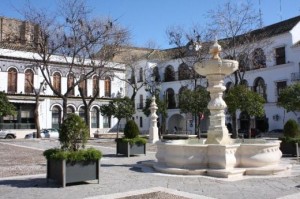 Definitely time to head on! With Helena snoozing in the passenger seat, we rolled up to Osuna – a small white washed town that is supposed to be ‘typically’ Andalucian’ – about an hour later. Seista’s are obvious still very much part of life here, as Osuna was all but totally closed down for lunch. We could park on the main square and walk up to the huge sandstone church overlooking it all without seeing more than half a dozen people.

Osuna gives a real sense that not much has changed over the years. The whitewashed houses are closely clumped together around the square, and many have chunks of plaster falling from the walls, but hang national flags proudly from the windows. You’d be hard pressed to find a satellite dish in Osuna. Off the square, a tiny covered fish market is hidden away from the far more picturesque city centre, which seems to be primarily for display. Walking up the hill you pass tiny courtyards full of shaded areas to take a nap, as well as some huge intertwined cacti. From the top Olive Groves stretch to the horizon.

A typical Andalucian village, it seems, is pretty dull at midday! 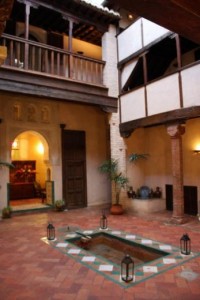 We made it to Granada for mid afternoon. The outskirts of the city are about as ugly as they come, but then at the end of a main road through a slightly nicer part of town, you suddenly find yourself driving down a riverside track. Spanish roads continue to stun me – how a main road through town can turn into a 12ft wide cobbled pathway without any turn off alternatives (we were confused enough to check later!) I have no idea, but we couldn’t turn round, so found a nearby hotel and parked up: anything to avoid another loop round!

It turned out the hotel was fantastic, an Arabian themed ‘Casa’ with a fountain in the middle and antique bedroom, it was tempted just to crash out, but it’s not every day you get to go to a new Spanish city, and we hadn’t even sampled Paella yet.

We took a quick tour of the city, which has an incredible number of shimmering fountains lit up at night, and then headed for the restaurant. I’m not a big fan of seafood – in fact, some of it makes me feel really quite ill – but the mixed Paella washed down with Sangria in Granada was excellent. Eating as early as 7pm in Spain is obviously frowned upon; we were the only people in the restaurant almost up until when we left at nearly nine. Being Saturday night, we decided to follow the Paella with wine and another one of those lethal coffee things and then head to the bar. Having avoided the ‘Irish Bar’ pitfall, we instead found a couple of random Irish people, and drank the evening away with a small vat of Mojitos and local beers. I felt slightly left out of the conversations about the beauty of ‘Clare’ (I think I’m right in interpreting that as meaning the town Claremorris rather than some Irish lass everyone has a particularly fondness for), but the crack (oh dear… ) was great none the less.