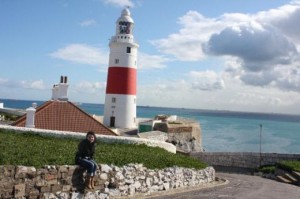 In the light of day, Gibraltar is an extremely culturally confused place. There are palm trees providing shade for traditional red English phone boxes, Spanish and English mixed almost equally on the signs and spoken in the streets, and red post boxes overlooking a turquoise bay. It’s not Spain, but it’s not quite England either. Our walk down the main high street was accompanied by some traditional English weather, however, and Helena and I wondered into another ‘English Institution’, the Irish pub (is there any country in the world you can’t find one, really? I can imagine even the dry countries in the middle east serving alcohol-free beer at a bar with an Irish flag over the door… ).

After a good fry up and half an hour browsing the fairly un-unique but very cheap main street shopping (Gibraltar main street seemed to have acquired an at least passable busyness since the night before), we came across a nice little chapel – a former mosque now converted to a Catholic church – and more importantly a slightly batty old woman. After the woman gave us a quick tour of the church, Helena mentioned that we were looking for somewhere to get married, and she directed us to a chapel in Catalan Bay, the other side of the island. More on that later. We hopped back in the car and went off to explore the countryside. 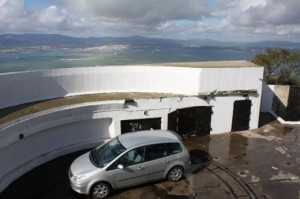 Gibraltar’s streets really are ridiculous. After driving most of the way up the rock the wrong way (and being chased by a moped the whole way – we thought they were trying to overtake) we decided to go to the sites in whatever order we happened to come across them. The first one we got too was Europa point, the southern most part of the European mainland. It’s marked by a very picturesque red and white striped lighthouse, and another mosque (they’re all left over from the time when Muslims controlled parts of Southern Spain). You can just about make out a foggy outline of Africa to the south, and the day tours to Morocco on sale in town seriously tempted us to head to a new continent, but we eventually decided to stick to the same plan and head up the rock.

After another piece of weaving around town trying to dodge various walls, badly parked motorbikes etc. we parked up in a gun turret overlooking Europa point and went to play with the rock apes. They’re very tourist friendly: one very nearly climbed in the car window (we spent the rest of the trip with a set of monkey footprints across the windshield), they run in and out of the crowds of tourists and will quite happily try to remove food from any bag that happens to be hanging near enough to ground level. As well as the monkeys, the rock also has a spooky set of caves, which operate a French style ‘Sans et Lumiere performance, though we weren’t going to hang around all day to see it. Having Been down there out of the emerging sun for ten minutes, being dripped on by the incessant waterfall that seemed to somehow slip through the solid rock above our heads was more than enough. Very pretty, though! 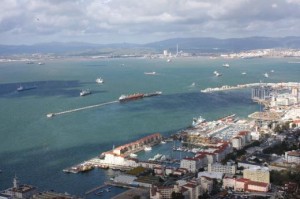 We dried off in the coffee shop and decided to head round to the other side of the rock and check out Catalan Bay. The nutty woman’s advice was absolutely bang on – there’s a gorgeous little chapel that opens almost directly onto an empty, curving beach (pictures attached). It’s very Mediterranean style, pastel colours and a rugged type of pretty, but it’s absolutely perfect, and Helena was getting emotional almost as soon as we walked in the door. Ladies and gentlemen, I think we have our wedding location. Subject to convincing the locals, of course. I certainly hope we can pull it off, as it really couldn’t be nicer. I can just see us walking between the fishing boats down onto the beach, with our guests throwing confetti at us as we walk!

A drive to Seville seemed a good way to recover after a day like that… not! Apart from an oversized cut out cow dominating the skyline, and a surprising amount of flooded fields, the trip was relative event-less. Seville’s roads are different to Gibraltar’s: whilst Gibraltar uses its buildings to narrow the roads to lane-like proportions, the Seville locals prefer to thin theirs out using bollards along the side of every street. They might have a road a couple of car widths wide, but there’s no chance they’re going to let you use it. Ridiculous.

The city, however, is beautiful. Nearly every street is lined with orange trees, the buildings are painted in bright colours and the open squares made up of picturesque check designs with fountains in the middle. Unlike Gibraltar, the evening was very lively, with the streets full of people promenading up and down, sipping on coffees and searching the shops and markets (every single shop seemed to be open late). It’s a very lively place, though the population have a certain Cristiano Ronaldo about them (the swept back hair and arrogant stride thing – Seville seems to walk around with a similar conviction to Cristiano, namely that he could have scored if he wanted too, but preferred to give everyone else a chance. It doesn’t matter, he’ll get one later)

It was warm enough in early February to have dinner outside in the street late in the evening, so we settled into a large portion of Tapas and a couple of beers in a small side street. Seville’s Tapas seems to be very fish based, and comes in a spinning tray that hangs from a spike. The restaurants have a collaborative effort going on to provide whatever you order; the waiters run from door to door, hassling each other relentlessly before eventually emerging with something that looks vaguely like what was advertised on the menu. Our meal was topped off with lethally strong coffee liquor – carajillo (?) – that tasted very much like it was made from heating the spirit and then mixing it with instant coffee powder. Ouch!

Having searched the backstreets until we eventually rediscovered our very well hidden hotel – crushing oranges underfoot as we went- we fell asleep early, dreaming of our newfound wedding spot. What a day!