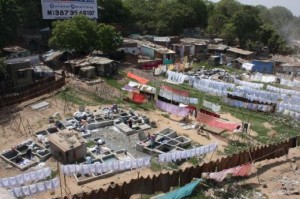 Ahmedabad is everything I imagined India to be before I’d ever been here. Just outside our hotel there’s a shambolic market that seems to morph daily and tumble around with the traffic. It sells pretty much everything, but with the exception of a handful of international brands there’s hardly anything you’d recognise from back home. Two five-cent samosas make a good lunch; plenty of the stalls sell only colourful pieces of plant or sneeze-inducing herbs. Lentils, flowers for religious offerings, a whole lot of ice cream stores and bakeries (unusual in India) make up the main streets, in which markets and individual, single item traders far outnumber the shops. The sites, sounds and smells of just walking down the road threaten to cause a serious sensory overload. On the corner an elephant stands eagerly next to the banana store, a snack from each bunch invariably heading over to be tossed from trunk to yawning mouth.

Ahmedabad straddles the Sabarmati River, and despite being a city of nearly five million, doesn’t seem to see many tourists. Back when the Brits ruled, this city was called the ‘Manchester of India’; a heavily industrialised centre that produces huge quantities of fabric. Along the river bank there are two four star hotels, each overlooking clutters of homes that look like dirty make shift tents. Each group seems to act as a clothes-washing factory, hanging huge lines full of clothes between the houses and next to the concrete washing pits. It looks like intense work in the sun. The river is full of junk and very low this time of year, with various locals so poor that they spend their days floating around on the river trying to fish out something they can sell. 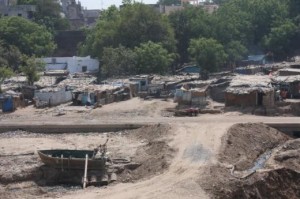 Like our other stops so far, the heat is almost unbearable (regularly topping 45 in the shade), and we’re having to retreat to our air-conditioned hotel room every few hours just to recover. The two-mile walk to the train station took me past a handful of mosques and beautiful white marble Jain temples and left me soaked through with sweat, and also ticketless; it seems a lot of people are heading away. Helena’s finished her time with SEWA, and we’ll be heading North to Jodphur next, hoping to move quickly and get up into the mountains and out of the heat for at least a couple of months, hiding away from the heat.

On my travels around Ahmedabad the most overwhelming thing was the level of poverty here, which far surpasses Delhi. One morning I played cricket with a bunch of school children, who had finished school by 11am and were on their way to work in their families businesses in the afternoon. We also had an impromptu English lesson in the park, though most of them seemed more interested in repeating any rude words they’d picked up then anything else.

On another day I visited several Mosques, getting a guided tour each time from the worshippers. A lot of the mosques here are over 500 years old, and crumbling to the ground, though they’re beautiful and surprisingly cool inside despite it. Not looking to get money from these tours is a sign of just how far behind other parts of India Ahmedabad is for tourism, and a refreshing change too. I found myself dropping more into the donation boxes than I’d ever give to a guide in Delhi, purely for the lack of irritation!

On our final full day I had planned to head out of the city and visit Gandhi’s ashram, where he plotted, built up a following and finally walked to Cambay in his bid for Indian independence, but a Gujarati Thali (a cheap selection of curries and bread, Thali comes from the South of India, but this region has developed there own version of it. I don’t think I’ll be eating it again!) the night before left my body trying to get rid of whatever was in it in whatever way possible. I spent the final day not leaving bed, sweating like a pig and making frequent trips to the bathroom, but the worst of it seems to have faded now, fingers crossed.