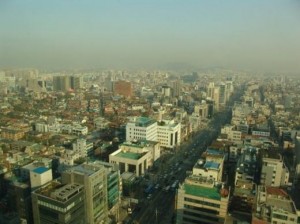 Korea’s second set of elections since I arrived are in full swing: having elected their President, the vote for Congress is now taking place. Campaigning in this country is like nothing I’ve ever seen before. Candidates are all assigned numbers for the election, and the streets are teeming with people wearing bright coloured jackets printed with their candidates number. Ground level politics is the norm here – there are not so many large TV adverts or big banners, more a mobalisation of a huge number of people who sing, make themselves seen and bow politely to everyone who happens to walk past them, chanting the name of their candidate in unison as you pass. Aside from being possibly the cringiest type of advertising imaginable this can’t be a bad thing: the general public – or at least a large part of them – are evidentially still heavily politicised in Korea, something that seems to be dying off increasingly back home. It probably helps that their two major parties are polarised, whereas ours seem to be basically slightly adapted versions of each other nit picking over policies that most of us really don’t care about.

It’s a strange time for the elections to come. On Friday North Korea threatened – for the first time since I’ve been here, though certainly it’s not the first time for too long – to turn Seoul into an expensive looking heap of ashes. Though most agree that is probably beyond their military capability, it certainly doesn’t do a lot for social harmony, or my confidence on my trip to Gaesong (in the North) going ahead next Saturday. People are noticeably on edge. In fact yesterday I saw the first piece of public violence I’ve ever seen in this country – four men dressed in black systematically destroyed a large food stall right outside the front of our office – it looked like the result of some kind of personal feud. The two people working in the stall were held back and had to watch their livelihood be destroyed in front of their eyes for a full twenty minutes before the police finally turned up, at which point the men simply turned and ran off. Awful.

On a happier subject I’ve been teaching the most wonderful group ever recently – a design company who spoke barely a word of English between them when I started teaching them around a month ago. They can communicate on a basic level now, so on Friday we went out and ate Korean BBQ with lots of traditional drinks together. They love to tell stories about their lives, and I’ve learned a whole lot of odd new cultural aspects to this country. A honeymoon, for example, usually involves a large number of couples traveling in a group together to some resort and then taking tours together all week around whatever location they’ve chosen. Frankly I think I’d rather not have one. But the group are unbelievably lovely – full of all the nicer things about this country: high levels of hospitality; considering you a friend for life after just a few meetings and putting themselves out in sometimes ridiculous ways just to help you out a little. If every group I taught was like this I’d be a teacher for life.

I’m off to spend a weekend being assaulted by luminously clad old women by the dozen, standing in lines bowing and chanting monotonously on every street corner. At least the elections on Tuesday, and cherry blossom season is upon us. It should be beautiful. Laters!