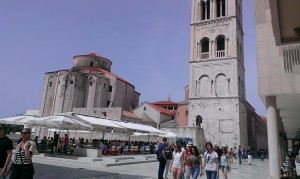 Apparently this kind of holiday is called a babymoon. We’re near enough to our little one’s arrival in mid August for Helena to need a letter from the doctor to get on the flight, but not so near that there’s any real risk involved in travel. We chose Zadar in southwest Croatia basically because it’s warm in May, near the sea, fairly quiet and cheap to get to. It turned out to be inspired, though probably for precisely the reasons that would make the place less appetizing to your average visitor.

Zadar sells itself on some fairly mediocre tourist attractions. The ‘Hello to the Sea’ is a neon light built into the floor of the harbour which offers little, especially when its in the process of being repaired, yet manages to appear on every bit of tourist lit you’ll find around the city. The Sea Organ is also pretty uninspiring; a piece of sea wall designed to make a noise as the waves rush in, but other than that it just looks like a slightly fancy bit of stone, and we didn’t get a sound out of it all week. More impressive is the general laid back culture. 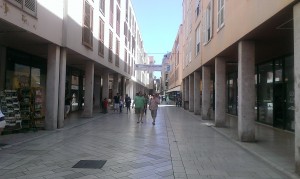 Aside from the heavy abundance of seafood, west Croatia seems to take its culinary inspiration from Italy. The streets are packed with coffee shops, pizza stands and ice cream, and probably the best features of the city are the spattering of Roman ruins that just crop up on street corners, almost like a scattered afterthought. The main centre’s found on a peninsula surrounded by the sea, but we stayed 3kms away, a stone’s throw from the bus stop and a slightly heftier stone’s throw from the beach.

We’d thought about the nearby ‘all in’ hotel, which only cost a few Euro more than the appartment we eventually settled on, but choosing against it was a really fantastic call. The hotel played shocking Europop versions of nursery rhymes for a couple of hours every night, just about far enough away not to be a major irritant. They were bad enough that they might have ruined the entire trip had we stayed there. As it was, the short stroll to shops and restaurants and spot almost totally away from the minor hustle and bustle of Zadar was absolutely perfect.

The options for getting around and seeing some other spots were pretty decent, too. We got an affordable hire car for the bigger trips, below, and explored locally by bus and boat. The island of Preko, for example, was 15 minutes by boat from the centre and the kind of place where they only have a small handful of shops selling a little bit of everything, and little marinas plus places to throw a towel down are the biggest attractions. The wonderfully named ‘Nin’ about 10kms away was also pretty impressive; a tiny island town surrounded by paddy fields and home to probably the best restaurant we discovered on our entire trip – seafood heaven. 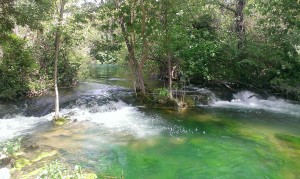 Our day trip to Krka National Park was something of an afterthought, tacked on to a day intended to be spent driving along the Croatian coast between Zadar and the fishing town of Sibernik basically because it’s nearby, and it looked pretty. We seriously underestimated it. Krka is a surreal landscape of tiny interwoven waterfall networks that somehow reminds me of the area inhabited by the warthog and the meerkat in The Lion King. This was the one day of the week with seriously hot weather, certainly over 30 degrees, so hiding away amongst the cool waterfalls turned out to make far more sense anyway.

Krka is definitely the less hyped of the two national parks we went to, but it has a winding style that makes the place seem less overpopulated than Plitvice (below), and a far more laidback feel to it. The scenery seems almost fake it’s so beautiful, with the atmosphere punctuated with the noises of little bullfrogs and huge fish flitting lazily around the pools. A kind of paradise, though the place is a sweaty experience even in early May until you get away from the entrance pathways and in amongst the cool water. There’s even a swimming option, though we didn’t make it quite that far with baby on board.

Sibenik made a bit less of an impact: it’s essentially a rustic seaside town filled with cafes, ramshackle boats and winding streets. Beautiful, but it didn’t stand out above Zadar or the other small towns we stumbled into. 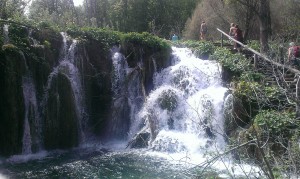 Plitvice National Park/ The Shortest Trip To Bosnia Ever…

Unlike Krka, Plitvice is somewhere that’s been on my radar for an age as a place in Europe I simply had to go, in part because of someone highlighting this Google image search to me a few years back; it’s one I’ve returned to regularly since. It’s fair to say expectations were absolutely sky high, possibly too much so. It is an amazing place, but even in April it’s also just a little but more of a tourist trap than we’d hoped for.

Still, this kind of natural beauty is tough to find, even if it does have a lot in common with Krka. The waterfalls are created by a strange pattern of hard and soft rock which weaves its way through the National Park, leading to tiny trickling waterfalls not all that different to Krka, but on a far more intricate scale. You walk along wooden boards suspended over the falls, and look down into perfectly green water where fallen trees sit collecting underwater growths, perfectly visible despite being several metres below the surface. Boats make their way across the lakes to several different stop off points, over postcard clear water and to spots that if you stumbled upon them away from the tourists would be exceptional (of course, I know we also fall heavily in the tourist category, but those undiscovered spots are always the best). Aside from that, about the only negative is the inability to swim; a really sensational place.

On the way back we decided to ‘stop off’ in Bosnia, which is only a few kilometres out of the way. I’ve always been curious about the place after my dad’s time there with the UN, and there’s certainly a change the moment you cross the border. It’s been a long time since I’ve been stamped in and out of anywhere in Europe (both Croatia and Bosnia do it here), and the roads are immediately battered, the houses in worse condition and the local men seem to have nothing better to do on a weekday afternoon than sit on their porches and throw back beers. I must admit I know precious little about Bosnia post-war, and I have a feeling it’d be an incredibly interesting place to spend a bit of time. We only stayed about half an hour – a combination of exhaustion, not being able to find a cash machine or a currency exchange place to do anything and nothing much seeming to be open. I suspect when we came back through the heavy-handed border after so little time we looked highly suspicious, but nobody had anything to say.

It’ll certainly be awhile before we get another holiday, so this being a good one was important. Bring on baby time!