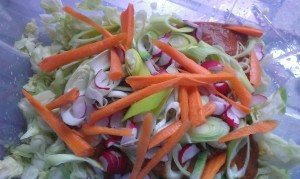 I’ve dabbled in Korean food since the 18 months I spent living in Seoul, and on a good day I’ve got to the point where my kimchi jjiggae tastes like at least a modestly impressive approximation of the kind of thing you can buy for 3 Euro in Seoul’s uber-healthy fast food restaurants. Making the kimchi seemed a logical next step.

For those less than familiar with Korean cuisine, kimchi is essentially spicy, fermented vegetables, most often cabbage. It’s also heavily salted and absolutely crammed full of garlic, and it’s fair to say it’s a bit of an acquired taste. I didn’t like it when I first arrived in Korea, but by the time I left a meal seemed incomplete without it, so much so that I whipped out a few punnets of the stuff during the speeches at my wedding, and succeeded (at least in part) in distracting from what I was actually saying.

Since I started recreating Korean food, I’ve been using Maangchi, an American-based Korean cook whose recipes are wonderfully authentic and contain ingredients that there’s at least a  moderate chance of finding in Europe. Her simple kimchi recipe (below) has the added perk that it doesn’t require buying a large terracotta pot and burying it in the ground during a frosty winter, which would be the more traditional way of making kimchi. I know this, as I once visited the kimchi museum, and fondled the plastic models of many different kinds of fermented vegetable. I kid you not. I just had to get that in there, a huge number of roof terraces in Seoul are also home to the old-school kimchi pots.

Here’s the process I used, on the off chance the above description convinced you of the essential-ness of adding a cancer curing, SAR fighting, diplomatic-issue causing superfood (thanks Maangchi):

This takes about 2 hours, but most of that is allowing the salt to absorb into the cabbage and hopefully avoiding the kimchi going off too quickly. It makes the fridge smell like a garlic farm. I still love the stuff. You might want to stay away from my breath for a little while, so since we won’t be seeing each other, here’s the evidence in picture form. I shall be doing it again!