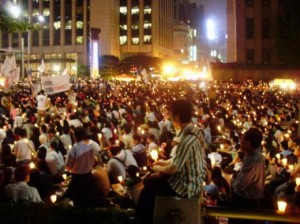 For the last month Seoul has been inundated with protests: the new president has made a mess of his first few months in office and the locals are more than a little unhappy. The biggest of these protests revolve around the US  Korea free trade agreement, and how unhappy Koreans are about the import of American Beef to Korea. Ive talked about this already (a few entries back  storm in a seollongtang soup bowl, a thorough explanation of it all is available here: http://news.bbc.co.uk/2/hi/asia-pacific/7457087.stm ). Whatever anyone says about the validity of the protests, however, actually experiencing them was something else. On June the 10th  the anniversary of a protest in Korea that directly led to the democratizing of the country 21 years ago  a protest of truly stunning scale was held in City Hall, central Seoul. I decided to check it out.Even getting to City Hall was quite a challenge: estimates on number of people vary wildly depending on the source, with figures ranging from 100,000 (the official police count) to in excess of 1 million according to the protestors. Newspapers speculate the number was in the region 700,000. On leaving the subway station we were greeted by a seemingly endless sea of glowing candles held aloft by a seemingly normal group of Koreans. As a foreigner  one of the only ones in town that night it was pretty intimidating. Old men in particular liked to hiss and knock shoulders as you walked past, showing their dissatisfaction with you having the tenacity to attend. After all, every white person must be American. (it really is time I bought that t-shirt with just because Im white doesnt mean Im American written in Hangul). The huge crowd waved flags, clutched placards saying Lee Myung Bak out; Health before 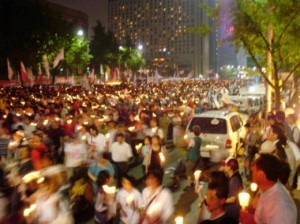 wealth and other assorted beef related slogans. At the beginning there was something of a picnic in the park feel to the whole thing, but that was before the political speeches, before anyone had had too much Soju and before the organizers encouraged the nationalistic singing and fast paced marching. The protests soon livened up, with the protestors chanting in time with visiting speakers and marching pointedly towards the presidential home. Having anticipated the problem, a wall of greased shipping containers blocked the road, leaving a wall of protestors pushed up against the buses while 20,000 riot police stared down at them from their home made wall.I preferred to get as high above the action as possible, snap away a few photographs and try to look as un-American as I could. I have a certain taste for the uncomfortable, particularly when it comes to travel, but this edged a little close to the line between uncomfortable and outright aggressive for my liking. After all, as much as I dislike the way my own country aligns itself with the Americans on a lot of things, I have to accept that it does and as a voter Im at least partly responsible for that, regardless of the fact that I never have and probably never will vote for either of the major two parties. Politics is certainly a different game over here: until something like this happens its easy to forget that I live in a democracy that is no more than 20 odd years old. Its volatile, in some ways politically undeveloped and resorts to some odd approaches at times to get what it wants. This may well have been the first time Ive ever experienced anything truly newsworthy (other than sport) in the flesh, and I could easily get a taste for it. A strangely thrilling experience, though having said that, Im definitely not cut out to be a war correspondent!J