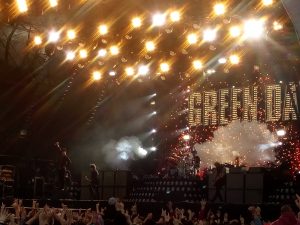 THIRTY ONE YEARS into a career that’s taken Green Day from gritty pop-punk scenesters to a far more accessible brand of pop-rock, California’s finest still play Kilmainham with the energy of an act auditioning for their first big break.

An indication of the sands of change came earlier in the day, however, as frontman Billie Joe Armstrong spent the morning searching for the quayside venue where the three-piece first played Dublin way back in 1991, only to find it’s now a Starbucks.

While time has certainly changed Green Day, too, all evidence is it hasn’t dulled them one iota. Armstrong’s brutally energetic, interactive fronting of the band is the kind of cheese-fest that sometimes falls the wrong side of cringe – particularly in his habit of espousing his band’s ethos on stage as a list of mundane inclusivity catchphrases – yet is utterly absorbing.

The balance here is strong, too. After opening with three new-ish songs (the very first of which features an audience member on stage draped in an Irish flag), there’s a comforting depth of the back catalogue to be trawling for the older fans. The likes of ‘Longview’, ‘She’, ‘When I Come Around’ and ludicrously glorious cross-dressing anthem ‘King For A Day’ are delivered at near album quality, and with just enough snarl around the edges.

The continued presence of lots of essential albums ‘Nimrod’ and ‘Dookie’, served up together with the best of ‘American Idiot’ and even a dabble in the uninspiring ‘Warning’ on the setlist is the act of a band aiming to please. Newer material is so thin on the ground here it could almost be a career retrospective, a crowd-pleaser that lasts 25 tracks and two and a half hours.

The highlights are acoustic closer ‘Good Riddance (Time Of Your Life)’, huge fireballs across the back of the stage during peaky choruses, a lengthy pre-gig audience sing-along to Queen (plus a pink rabbit ‘giving birth’ to giveaway soft toys), and an entire track played on guitar by a young audience member who was then handed the instrument to take home. For all the oohs, ahs and hand waving, it’s utterly engaging.

That the show lacks edge, truthfully, only matters if you’re holding Green Day true to their 90s roots. What they do offer is one of the music scene’s better doses of nostalgic familiarity, packaged in one of the liveliest, most memorable stage shows going; more ‘Having A Blast’ than ‘Burnout’.

As published in the Dublin Gazette, July 6 edition. Reproduced here with permission.