I first came across Alexis through a borderline obsession I have with one of his acts, We Cut Corners, and have happy memories of fireside fun down at Other Voices in Dingle a couple of years back. I didn’t realise at the time just how far-reaching Delphi Label really is, but as my knowledge grew, I recognised the Alexis’ outlet as something a little bit unique on the Irish music scene.

I was particularly taken with their special edition releases, such as the handcrafted five-copy only four-EP release for Record Store Day 2011 (see below right), which remains one of the most treasured items in my record collection. They put out a similar release a year later. This is a small label that takes its image and integrity seriously, and does the best it can to produce something unique and interesting at every corner. In connections with Le Galaxie – who’ve now made their way to a major in Universal – and We Cut Corners, the label is also home to two of Ireland’s hottest acts. I was delighted, then, when Alexis agreed to give me his take on Delphi, and Irish music in 2015. Kindly legend that he is, he’s offered up the most in-depth ‘State of the Nation’ to date. 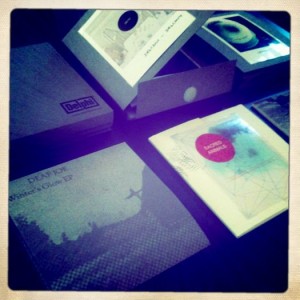 What are the greatest challenges facing a small label in 2015?

Well, the obvious answer is the perennial challenge to release hit records!  Whatever else you could say, every small label is hoping to have that success.  It’s the one thing that can provide the revenue and reputation that allows you to stick at it and grow.

Beyond that, the greatest challenge is bridging the gap between a relatively unchanged cost-base, and dwindling revenue streams. This may sound like old-hat to the casual observer, ‘label complains that no one is paying for music‘, but at the coal-face it is still very much the big issue.  This is illustrated by how few small labels are still releasing music in Ireland.  It’s impossible to exaggerate the degree of structural change that’s occurred in the recorded music industry.  The flow of wealth in intellectual property away from creators/rights holders, and to the dominant intermediaries (as in the big services that deliver the music to listeners) is on a massive scale.

We still by and large live in an economy where it’s necessary to pay the going rate for any number of services and overhead items, and that’s the same for the things labels require, be it office costs, staff, advertising and promotion, design, manufacturing of physical product, but people consume music in a way which is economically completely unlike that.  The reality is that unless you have an out-and-out breakthrough hit it is very hard to make the numbers add up, certainly if you’re releasing physical product.  There is the argument that the digital age has provided the opportunity for artists and labels to enjoy a commensurate fall in their cost base, in terms of harnessing digital know-how and technology for recording, production, artwork and design etc.  The reality is that professional product still requires professional services, studios, engineers, designers, videomakers and everyone needs to be paid.  The sums are often not so pretty!  A recent article reported that 1% of artists are earning 77% of all revenue from recorded music, I’m not sure how that compares to 20 years ago, but it is something which generally does not bode well for new, independent labels… so back to finding that hit!!

How do Delphi pick your artists?

‘Pick’ sounds a bit like going into the artist shop and browsing the rails, and not many artists, managers and labels are pret-a-porter.   In our case it is a pretty organic process, firstly we want to be confident we are dealing with something really exceptional creatively.  Then it’s about nurturing a relationship and ensuring there is a fit in temperament and vision for the shared goals of artist and label/manager.  So the process is generally gradual and requires patience, and releasing records takes time.  Sometimes I get emails from bands saying they want me to release their record and they’ve already set the release date for 6 weeks time, that’s obviously totally unrealistic!  For a small label like us, we can only ever work with a small number of artists anyway, so committing to a brand new artist is pretty rare.  You quickly learn that you can only ever do things in which you have complete conviction, for the simple fact that you have to champion it day-in day-out, so without that you soon come unstuck.