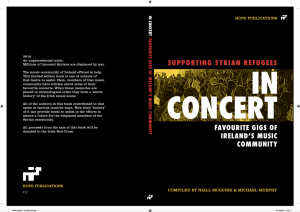 As the only surviving original member of a 17 year old iconic Bostonian act, Dropkick Murphys snarling vocalist Ken Casey has done a whole lot of things you might not expect. There’s millions of dollars in charitable funding for a start, raised through activities like tomato launching karaoke, or possibly the least offensive VIP packages in music. Then there’s the stereotypical Irish pub business in Boston, unintended riot incitement in Mexico, Christmas songs on a January album, and a determination to carry on until Dropkick Murphys become what they’ve always been inspired by: a form of trad. Three kids, a hectic tour schedule and an heartfelt hatred of neighbour Steven Tyler don’t seem to have slowed the the ex-laborer down one ounce.

Latest effort ‘Signed & Sealed in Blood’, in fact, is a less than typical Dropkicks album. Aside from that iffy Christmas song, it takes off in all kinds of assorted directions, through straight up rock and balladry as well as Celtic-inspired punk. For Casey, it’s simply an expression of interests: “Country and rap are probably the only two directions we won’t go. We’ve always had a bit of a 50s rock and roll thing, an Americana folk influence… we’re lucky to be able to spread ourselves creatively. We can write anything from an acoustic ballad to a straight ahead hardcore song. We have a lot of space to wander, as long as we don’t go so far that the fans throw us right back. I grew up listening to a lot of trad. Nowadays I tend to wander towards mellower music, sing-songwriter stuff, but not like coffee shop stuff but punk guys. One of my favorites at the moment is a kid from Boston called Brian McPherson, who plays just with an acoustic guitar, but there’s so much power and passion behind it. It’s pretty moving, it’s always impressive to me when someone can create that kind of passion and power with just an acoustic guitar. It’s something I could never do. Being one of seven you’ve got six other guys to share the success or take the fall with you.”

There’s a lot of history in those seven guys and their heavily-emphasized Irish roots, dating back to Casey’s childhood in Milton, not far from Boston. Recalling his upbringing, Casey finds his own Irish background flooding through his early days: “When I was growing up, the census bureau told us that Milton was the town with the most Irish ancestry in America. Growing up, it’s just what everyone was, you didn’t really even think about it. Boston is one of the few places in America where a lot of family patriarchs are of Irish heritage, so you still find a lot of Irish culture. It’s a ripple effect, my parents and grandparents were from Ireland. There’s a lot of pubs. I actually own a couple of pubs. I guess it’s a business we tend to go into.”