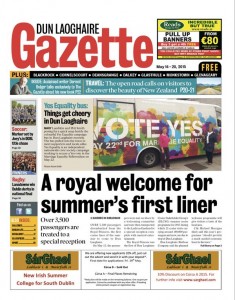 For the past two months, I’ve been freelancing in sports journalism at the Gazette Group, which publishes seven papers  a week (a separate paper for each of Dublin City, Swords, Lucan, Clondalkin, Blanchardstown, Dundrum and Dun Laoghaire). I even ran the sports section for a week while the normal editor was away, which was an intense and memorable experience – far more full-on than the likes of GoldenPlec Magazine purely because of the time constraints, but extremely rewarding and something I really hope to be able to do again (you definitely need another holiday, right, Stephen?!).

The Gazette offers a uniquely complex sports role, in some senses. There are no specialists – a small team of sports journalists have to be able to deal with every sport that could possibly come up, and to cover it well. It’s also highly local: the Gazette only cover sports that are typically at a level below what the national papers are interested in: Leinster Senior League soccer, age group soccer, senior and intermediate championship GAA, age-group sports across all disciplines, and local athletes going for big things. The remit involves knowing – or finding out – what’s going on across small areas of Dublin, and what’s of interest to the people living there. That might be straightforward, except there are seven different local areas to deal with, so it’s not knowing about one place and its stories, it’s knowing about seven. It goes without saying, the editor has perhaps the most impressive local sports knowledge of anyone I’ve ever come across.

I’ve flicked back through all my pre-edit drafts, and in the past eight weeks I’ve had over 80 stories run in the paper (they don’t all come with a byline, presumably because it would just look ridiculous on some of the smaller ones).

So this is a bumper post, but nothing like as bumper as it could have been, because.. well, I have to make some effort to preserve the sanity of those who happen to visit this site. I thought I’d narrow things down to my five of my favourite pieces….

Feature: an inspirational interview with Dundrum lady Carol Brill, on dealing with the sight and hearing debilitation that comes with Usher’s disease, and how she’s found solace in the unlikely world of blind golf…