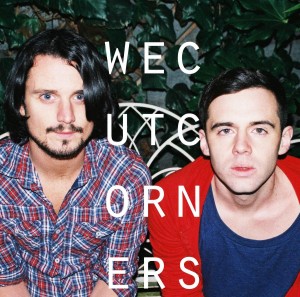 In a happy coincidence, as this video landed in my inbox today, a preview copy of We Cut Corner‘s debut album ‘Today I Realized I Could Go Home Backwards’ arrived simulataneously in the post courtesy of the lovely folks at AU Magazine. The band sent me half the album as a preview almost six months ago, and while I’ve only got as far as debut single ‘Go Easy’ (track two, since you asked), I can already confidently state that this will take some toppling as my favorite album of the year. Having followed them around Dublin for the past month or so after clocking what I see as a the final stroke to their masterpiece – a surge in live confidence – a few weeks back, I’m excited in the same way that I was when The Cast Of Cheers first came along last year, and I could barely stomach the idea of taking their MP3s off rotation.

A Pirate’s Life is another track sets We Cut Corner’s scene just beautifully, a play on an ancient little ditty re-written as something both witty and quite stunningly delicate. They have wonderfully expressive ways of saying things, all clever twists on words that seem to morph in meaning with a few listens and are invariably even more touching when you suddenly clock exactly what it is their talking about. It actually took singer Conall telling me that ‘The Leopard’ is about sex with someone who’s frighteningly more experienced than you; I’d taken an entirely different meaning from it and I think there’s real beauty in that. This is a slow one, and I still can’t make my mind up whether I like them more when they’re mellow or when they’re going down more of a White Stripes direction. I absolutely love this, yet I think they’ve still got at least three songs on the album that are deserving of some serious radioplay, but are not out yet (Dumb Blonde, Toll Free and Say Yes To Everything), and that’s without having actually heard the whole album yet. The animation on the video’s something a bit special, too. You’ve been warned, I’ll be rambling about these guys a whole lot more in future.