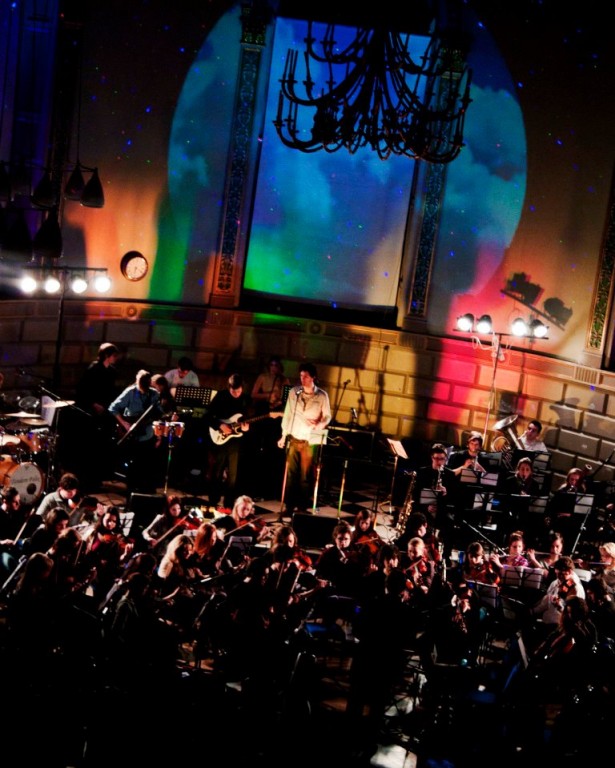 From the tech get-up of Daft Punk’s Discovery to the indie-chic of their Arcade Fire love-in, Trinity Orchestra’s recent explorations of the contemporary music scene – performed with a full on rock band set-up down the front – have won admiring glances from the likes NME and the BBC. They’ve clearly made an impression on campus, too: tonight’s show in the gorgeous 18th century Trinity Exam Hall is nearly sold out, but still sees a line of at least one hundred, some queuing for over an hour, hoping to grab the last tickets. Few succeed.

Tonight is a first outing for Dark Side Of The Moon. In fact, according to the programme, it’s the first ever orchestral adaptation of the album, and with variations of the official album imagery used as trippy backdrops and rainbow lights glittering around the front of the hall, it’s immediately captivating. The rockier element of the set-up hovers over the orchestra, strutting and switching corners in front of the lights, looking nervous at times, but packing plenty of punch. The playful drama of the album – the moments of near silence, the chinking of coins during ‘Money’ and the swirling, slow-building ambient backdrop – leave ample room for playful experimentalism on the orchestral side. While the rock-band aspects are much as they might have been performed by Waters, Mason and co. (the accuracy and similarities in sound themselves are an achievement), the orchestra serves up a real aural depth.

There are plenty of ways in which an orchestra can work with Pink Floyd’s flutteringly psychedelic output. Lead guitar throughout tonight’s is suitably noodling and refrained, toned-down in a way that portrays far more urgent, tensile energy than a more frantic performance could have pulled off. The orchestral depth is well exploited, used in a fairly minimalist style, but giving a layered, substantial feel to the likes of opener ‘Shine On You Crazy Diamond’ (an on-the-night extra offered – as it was originally intended – as an ode to Syd Barrett) and ‘Time’. The urgent, screeching vocals offered up as part of ‘The Great Gig In The Sky’ are particularly exceptional, far surpassing the recorded form in a genuinely exceptional moment. ‘Money’, the album’s ironic, capitalism-bashing smash, is substantial and wonderfully cutting.

The changes Trinity Orchestra apply to The Dark Side Of The Moon are minimal; a wise decision in performing an album of such repute. Happily, their recital is also strengthened noticeable over the well-touted Daft Punk show. While the ‘Discovery’ performance had a fierce danceable energy, the vocals always came across as a fairly marked weakness. In their latest offering, six different vocalists offer substantial range: while many of the participants are the same, ‘The Dark Side Of The Moon’ seems better suited than the electro-tinged vocal oddities Daft Punk serve up. In some cases the vocal parts are extremely minimal, but the full effect is nothing short of stunning.

In tonight’s programme notes, orchestral auditor Peter Joyce is keen to remind his audience that their core material is, and continues to be, their classical repertoire. That might well be the case, but as long as Trinity Orchestra persist in producing contemporary performances of this class, they can expect to grace a whole lot more modern-day festival stages and substantial venues along the way. We certainly wouldn’t bet against this being another viral smash.