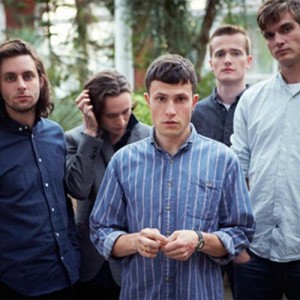 We Cut Corners increasingly glowing reputation in their own city is set to hit a peak this week, when they go into the Choice Music Prize as 5/2 second favourites. It’s the culmination of a slow-building career centred around exceptional song writing; playful lyrics, witty tales and a musical range that places them somewhere between The White Stripes (The Leopard) and the classical styles of the 60s legends, delivered with a comic overtone (Dumb Blonde, A Pirate’s Life). Live, Conall’s falsetto shines out from behind the drums, and the sharpness and tone of the slightly nervous duo comfortably expands to fulfil The Academy. After years of pub/ club level shows, the step up must seem abrupt for the pair. While the stage presence might still be an iota lacking, the tracks, once again, prove to be winners.

Despite being hotly tipped almost relentless for the past few years by the likes of NME, The Fly and Q over in the UK, The Maccabees have always seemed like they’re a touch too Brit-cult to have really made it in Ireland, at least until tonight. This, at least locally, is a step up. The set is frantic; delivered in a style that’s exceptionally close to their on-record sound, but with an added bite and no lack of inventiveness. Tracks from recent third album ‘Given To The Wild’ – ‘Unknow’ and ‘Glimmer’, for example – take a gentler path, and feature the wonderfully named Orlando Weeks manipulating his cultured vocals though the mic live on stage. It’s comfortable, too, producing eclectic asides that have a vocal hint of Win Butler to them, only to flit casually back into full on, snarling alt. rock mode.

The old classics remain the crowd pleasers. There’s a simplicity to ‘Love You Better’, for example, that could have it tagged as throw away, yet it’s delivered with such regret, and screamed back from The Academy’s heart with such fervour that the repetition somehow seems beside the point. ‘Precious Time’ is similar, a track that’s instantly accessible and has the potential to irritate, but in a live setting is just the fire under the feet of the audience that The Maccabees encore needs. Things have moved on, but not the old tracks have aged well, too.

Like the much touted rise of The Black Keys, The Maccabees climb somehow seems to be simultaneously exalted from all corners and largely ignored outside of their own genre. Their live performance, vocals aside, isn’t the most complex of beasts (it certainly doesn’t seem to be a fluid construct). It is near-flawless vocally and enticingly intense, however, and that familiar feel doesn’t seem like as much of a loss as you might expect. The depth to the song writing – delivered tonight in the form of a 15 song set that still lasts less than an hour – is becoming harder and harder to ignore.