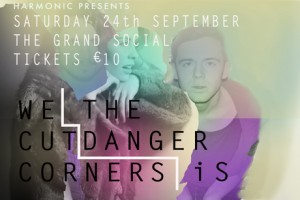 Niamh Farrell’s The Danger Is and melodic duo We Cut Corners have both been making some serious waves in the Dublin music scene recently. The joint vinyl release of ‘Nothing Stranger’ and ‘The Leopard’, then, is a perfect opportunity for both bands to play off each other’s growing reputation and show off their developing live skills.

We Cut Corners in particular have shown a dramatic improvement in on-stage antics recently. While their songwriting skills have always seemed exceptional, early shows had a nervous, rough around the edges feel to them. Tonight’s set, on the other hand, is abruptly beautiful, with the duo demonstrating that their stripped-down guitar/drum combo is far  from a limitation. Slow efforts like ode to a holiday romance ‘Dumb Blonde’ and infectious single ‘Go Easy’ are set against a raucous edge in tracks like ‘The Leopard’ and the jarring twang of ‘Say Yes To Everything’. The duo look set to hit full pelt just in time for the release of debut album ‘Today I Realised I Could Go Home Backwards’, due on 11/11/11. If tonight is anything to go by, the album is going to precipitate a significant step in status. About time: this band write songs some far heftier names would be extremely proud of.

The Danger Is, in truth, are slightly overmatched here, but Niamh Farrell’s voice is certainly not to be sneered at. The multi-instrumentalist has one of those voices that initially seems tame – especially when she opens with a pin-drop acoustic track – but soars to a roaring, rocky height when called to step up a notch. Her musical flexibility revolves largely around her ability to carry an unpredictable melody and a love of clever pop hooks. Live, ‘Same Face’, a track  drenched in intelligent harmonies, is perhaps the best example of what Niamh is driving at. While tonight’s performance hasn’t floored us the way she has in the past, it’s impossible to doubt the potential.