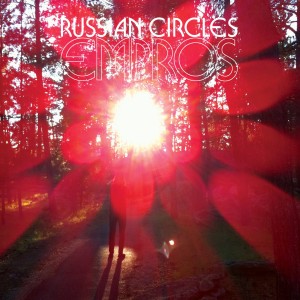 This Saturday, The Richter Collective’s partnership with impressive US-based label Sergeant House bore fruit in the most public of ways. Having knocked up a cross-promotional deal that’s seen some fantastic American exposure for a host of Irish acts and introduced us to the likes of Le Butcherettes, Native, Rx Bandits and both of tonight’s headliners (I urge you, if you’re on any level into thumpingly loud, well-written alt. rock, head over to YouTube and check out as many of their acts as you have time for), tonight’s show sees two of the labels finest assets given a debut Irish airing.

First, though, there’s the not insignificant matter of local instrumental-rock heroes Enemies. Fronted – if such a band can have a front man – by the enigmatically talented Richter maestro Lewis Jackson, the swirling four-piece have the venue rammed and enthralled far earlier than The Button Factory’s become accustomed to. Their set up merges intricate swirling melodies with occasional moments of true heavy intent; a display that could be used as a demonstration of the technical boundaries of a guitar act, yet never seems lacking in charisma. Enemies only seem more intricate as time goes by.

Deafheaven, though, are something else. Their style seems immediately divisive: corners of the audience are openly repulsed by their abrasive, posturing take on modern metal.  Vocalist George Clarke is very much the hub of this band. The sound he omits is layered deeper in the mix than you might expect, and consists almost entirely of high-pitched screeching, lyrically unreachable and delivered with seemingly genuine anger. He flexes every muscle in his body, contorts his face bitterly at the crowd, and during the large periods in which he’s not involved, simply pulls poses at the stage front as an intricate racket kicks off behind him.

Clarke is bordering on obnoxious, but for us falls just the right side of that dangerous fence: he dominates and fascinates. Alone you’d almost want to slap him, but as part of this act as a whole his aggressive nature is nothing short of outstanding. The rest of the band, then, is very much a bit-part to Clarke’s show, but they’re technically polished, looping rhythm upon rhythm of dark, intense noise into a huge swirling crescendo of battering brilliance. Drummer Trevor Deschryver smashes his drums so accurately and efficiently it’s a wonder his arms last beyond a single consecutive night. Deafheaven’s set is a full on sensual assault, and not for the faint hearted, but infusing metal-inspired noise with screeching attacks and the odd moment of contrasting calm is inspired. Would we listen to it on record? Possibly not, but live its mind blowing.

Russian Circles, then, have a battle on their hands. Their style is more intricate, with a creeping array of Arabian stylings seeming to flit from the neck of Mike Sullivan’s guitar during quitter moments. While Deafheaven seem openly hostile to their audience (an unforgettable part of their act), Russian Circles are entirely indifferent, yet the strength of their extended guitar musing pulls things through. Tonight’s set is drawn largely from their most recent ‘Empros’ album, with the aggression of Madrek starring at its heart. The songs are long, slow-building, ever more intense and never less than beguilingly sophisticated.

Hefty as it can be, there’s a hypnotic quality to Russian Circles; one that expands on a theme of using gorgeously intricate guitar reps seemingly lifted from far more electronic-focused brands of music. Sullivan’s pedal set up in particular requires deciphering; his intricate finger work the centre of a musical web backed by Brian Cook’s complimentary bass. Russian Circles are unlikely to garner much in the way of mass appeal, but there’s a growing musical niche propelling genre-fusing, gorgeous gutter-slam acts like this into the limelight. Tonight’s show quickly descends into a near riot. For us, Deafheaven just about take it, but the strength of the overall line up is astounding. Its glory – on all three fronts – is in the acts’ ability to be heavy without losing a sense of mesmerizing detail.

As published on Goldenplec.com, May 2012.