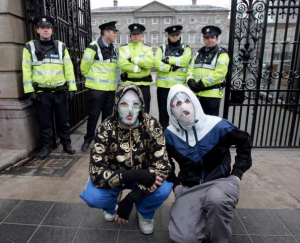 If the appearance of a comedy hip-hop act in America’s capital of culture does one thing, it brings out hordes of Irish expats. Half of tonight’s crowd is made  up of the Irish and the Irish-ish of the Big Apple, supping Guinness and putting their dubious Limerick slang into overdrive. The other half, natives of the Lower East Side and beyond, seem largely drawn in by ‘Horse Outside’ going viral beyond our shores. They make up the bewildered back end of the room, and start giving each other confused glances the moment the announcement – “after a four day journey on horseback from the wilds of Limerick City” – kicks in.

The Mercury Lounge is about the size of Whelan’s, but despite being a Bowery Ballroom spin off venue, a bit of a dive. The concrete décor of the gig room and sweatbox feel seems an apt backdrop for the duo, who open with ‘Antney’s Eye’, which just about reaches that dubious chorus line before all hell breaks loose, and continues to unfurl until the final notes of ‘Spastic Hawk’ ring out. The boys are on top form, breaking out the rave dancing, drug-induced speed races (no actual drugs involved, just an experimental ‘politician’) and stronger stab city accents and welfare-isms ever. Never have the words ‘gas c*nt’ been used so much in quick concession.

What really seems to impress the local crowd, though, is that what they’re watching clearly isn’t just a novelty act. Their impressive backing tracks and ability to rap like the entire thing’s far from a joke is comfortably their most impressive live asset, and with the album seemingly yet to make it over to the States in any major capacity, the likes of ‘Up Da Ra’ and the Irish version of ‘I Wanna Fight Your Father’ – the ones that can only be found in the darker recesses of YouTube – become the unexpected highlights. Not that the singles don’t strike home, too: ‘Black Man’ in particular seems to evoke a mix of wide-mouthed outrage and badly-stifled chuckles in a city where racial divisions seem to permeate everyday life.  When ‘Spoiling Ivan’ is introduced as “a song about a six year old boy” shortly afterwards, the hilariously syrupy ballad’s title evokes worried looks; what follows is all the more hilarious for how it contrasts with expectations.

Things, clearly, are messy. New York doesn’t go easy on a Saturday night, so much so that the 2nd Avenue subway station has descended into a rave to some beat-backed steel drum techno, and the gorgeous Rockwood Music Hall (where Duke Special played a fabulous set full of odes to old photographs to an almost empty room earlier in the same night) is rammed to the rafters come 8pm. Things just don’t stop here, and the entertainment levels, frankly, are of ADD-inducing proportions. An Irish rap act very much intent on ripping our own culture a new one can only be proud of pulling so many in.

We’re almost disappointed to have spotted Blindboy Boatclub drifting around the front entrance entirely mask-less pre-show, but perhaps even these lads wouldn’t try and tackle the crowded streets of a New York Saturday with a Spar bag on their heads. They do, however, leave a trail of very happy expats, the odd Dublin holiday-er who just couldn’t resist and a sweating throng of half offended, half converted locals in their wake. Proof, if it were needed, that Limerick’s most wonderfully ridiculous output really might have a more global market.