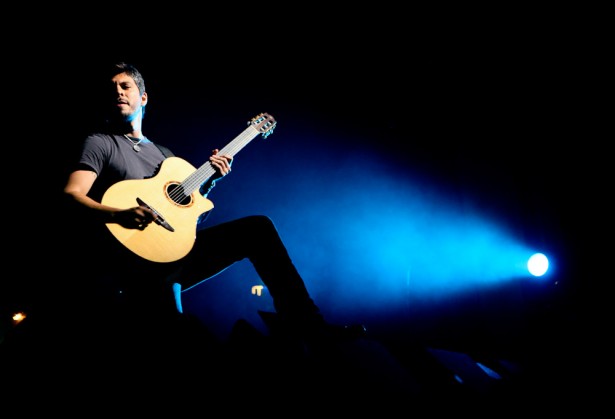 You rarely come across a character as charmingly happy-go-lucky as Wallis Bird. Having risen from de facto headliner of many an open mic session at The Mezz, the hippie purveyor of loveable pop ditties and wonderfully rock out moments is a larger-than-life character. With a third full-length in These Mistakes Are Intentional just around the corner, Wallis’ output in the Olympia Theatre tonight takes on a rockier feel to fit in with the headliners. While it lacks the stunning, smile-inducing range of some of her headline shows, when a performer’s capable of playing guitar with one hand whilst drinking with the other, head bangs along to her electro-acoustic and relentless mocks herself it’d be a hard-hearted type who didn’t enjoy it.

Rodrigo Y Gabriela, though, are an extremely hard act to be put alongside. This is the very first outing of their new Area 52 project, the live rendition of which has only been put together over the last few days. I must admit to being a real Area 52 sceptic: at first glance, it seemed like a way to get an album out without actually writing much in the way of additional material, and Rodrigo admits as much early on, explaining “we didn’t plan to tour Area 52. It was originally an idea to give to the record label when they started hassling us for an album, so that we could take a break.” When the musicians started jamming together, though, the uniqueness of the project took over, and touring became inevitable. (The name, incidentally, refers to Cuba, making the obvious extra-terrestrial comparison because the island doesn’t get much musical business, and, in the opinion of Rod Y Gab at least, should).

As for the scepticism, it probably takes seeing the show live to really wash it away. Rodrigo Y Gabriela are pretty much as we’ve come to expect: technically immaculate and joyous performers. Gabriela stands out tonight, strumming her guitar like a trad musician plays a bodhran, and shining though the solos. Rodrigo isn’t far behind, of course, pulling rock poses as he hammers through tracks at lightning speed and in a more traditional playing style. The Cuban orchestra all get their moments to shine, with bassist Alfredo and Kildare man Alex on keyboards both shining emphatically when given their solo moments in the spotlight.

What works above all else, though, is the way the orchestra morph the Rodrigo Y Gabriela sound. Instead of a flamenco meets rock output with a serious head banging edge and highs hung firmly on brilliantly speedy subtlety, the portions of tonight’s show that feature the backing band are jingly and atmospheric, with the highs beefed out and emphatic. As the opening night of the show, it’s not surprising that there are sporadic moments when the layering isn’t perfect, and the message is a touch lost, but generally speaking that same technically proficiency and the repetition of those wonderful hooks dotted through a set speak for themselves: this setup is outstanding.

With tonight’s set lasting for nearly two hours in total, though, it is a relief to see an acoustic interlude from the duo slapped in the middle. If we had to pick a highlight, we might lean towards the encore performance of ‘Hanuman’, a track that needs to be seen to be believed. Being able to produce the level of complexity required live is really something else, and it’s done flawlessly. ‘Santa Domingo’ – the opening track to the new album – also has a particularly exceptional style to it, with the Cuban contingent in full flow and that tropical edge flitting in and out of the layering. Glancing around towards the end of the show, it’s difficult to spot a single audience member who’s even an iota less than fully engaged: there’s a reason this duo have come so far, from Grafton Street to touring the world, and it’s not one that’s hard to uncover. Tonight’s show is the kind that tests the limits of superlatives, so we’ll restrict ourselves to just one in summary: with or without an exotic backing band, Rodrigo Y Gabriela remain utterly sublime.