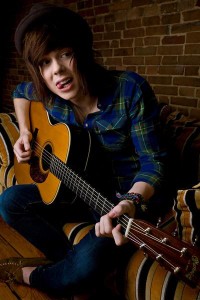 As far as hype goes, Christofer Drew and his newly-added Missouri youngsters ‘Never Shout Never’ are fast edging towards pop’s new ‘most likely’. The 20-year-old comes across as a savvy operator: his rise has been cunningly assisted by free download hook-ups with fellow hyped-popsters The Maine, as well as rapid progress on MySpace and YouTube. Between the two web-fronts, he’s clocked up close to 200 million listens. Never Shout Never might still be some way short of a household name, but reaching close to that level of acclaim is already looking like a ‘when’, rather than an ‘if’.

Still, fame doesn’t come without its drawbacks, especially when you’re young, skinny, pretty (or so we’re told) and singing along the lines of how so many young ladies are misunderstood beauties. Not least amongst those drawbacks are ear-splitting screaming girls, and tonight it’s a true barrage. Don’t get us wrong, we have nothing against enthusiasm, but we’re talking about screams that quieten down fractionally rather than dissipate during songs, and they’re ringing in our ears for an hour or two after it all dies down. It’s enthusiastic, but it’s also like watching a show recorded on a decade-old mobile phone, except the white noise is levelled up by several octaves.

Drew doesn’t seem sure how to deal with things. He’s got be thrilled on one level. At times he looks bewildered, yet at others he seems to go all in with the encouragement, not least in counting down to a time when the audience should ‘all piss ourselves together’, an idea accompanied by hissing noises and Goldenplec creeping as far as we can manage from the rest of the attendees. Frankly, The Beatles could get away with screaming and urination*. Just. When it happens with a relative unknown like Never Shout Never, we think twice about whether we actually belong in The Academy tonight at all.

In truth, it’s hard to draw objective views on music’s quality when it’s surrounded, and overrun, by such silliness. Sure, the kids are no doubt having a blast, but nobody older than a teenager would go to a show like this twice. Still, as all-out cringe-festy as things get, there are some high points. The biggest of those comes in the encore, YouTube smash ‘What Is Love?’ (the video for which, incidentally, is superb), which is cheese-tastic but nevertheless subtle enough to be affecting, and performed with obvious passion. There are other moments of class, too, usually served up in the quieter lulls in the set, when Never Shout Never, a clearly able musician, gets the chance to let the music alone shine. Not that it’s entirely convincing. The guitarist’s brief foray towards a balcony ledge says a lot: a contrived, pseudo-rock move if ever we saw one, especially performed at a snail’s pace; once he arrives he spends most of his ‘adventure’ trying to stop the crowd around him from stealing his hat. At least when things actually become about music, though, Christofer has the chance to demonstrate that while his song writing might be quite incredibly Edam-centric, his  sophisticated- Bieber act doesn’t lack potential.

So musically, things aren’t our cup of tea, but we’ve seen a whole lot worse. What’s most dumbfounding is that we can’t give you a real verdict on the music live; we didn’t hear anything like enough of it over the incessant yelping to really form a definite opinion, which leads us to ask, was there really all that much point in playing at all? What we can report, is that if your idea of a good gig involves the reading of audience love letters on-stage, ‘marry me’ cardboard messages, bodily functions and over an hour of relentless screaming (seriously, how do people do that?) this’ll probably be right up your alley. And there are plenty who will dig that, clearly, otherwise Justin Bieber, Boyce Avenue, One Direction and the like simply wouldn’t have a live audience. For those who prefer a stage presence or atmosphere that doesn’t reek of ‘tweenagers first gig’, steer well clear. If you need me, I’ll be purging my mind with a grunge marathon.

*urination may or may not have actually taken place. Forgive us if we chose not to check. Still, the thought was there…