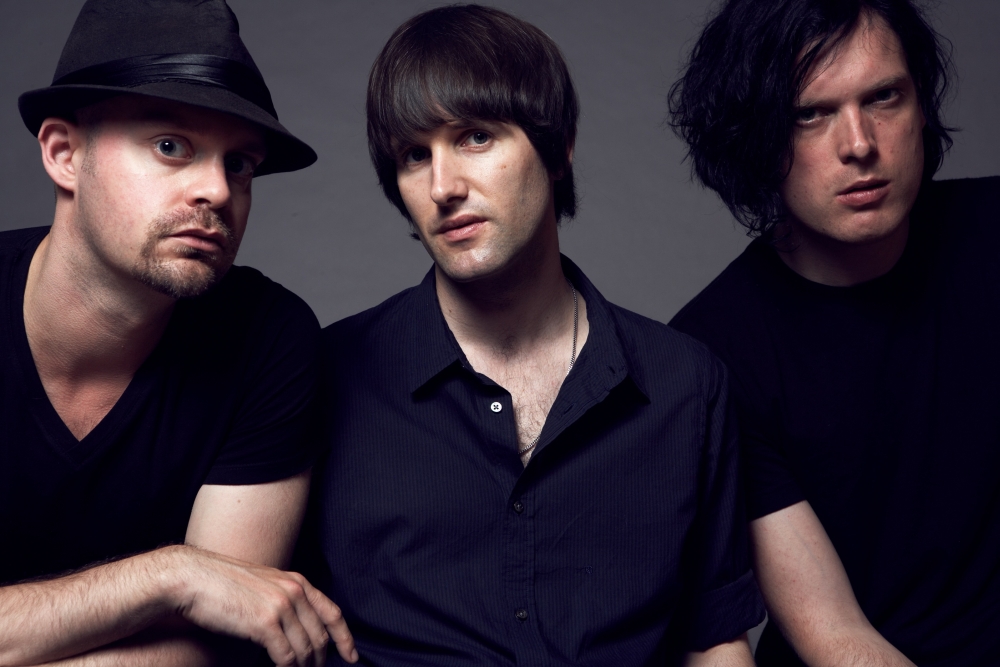 From the outside, Ash seem to be in a period of flux. Bloc Party’s Russell Lissack was recently and somewhat surprisingly replaced by the band’s old comrade Charlotte Hatherley for the Free All Angels tour, while drummer Rick McMurray has also been taking some time out to take care of his newborn, with LaFaro drummer Alan Lynn taking over stick duties. Even with Rick back, the band are celebrating 20 years together making music from opposite sides of the globe, with Tim and Mark based in New York and Rick over in Scotland. AU caught up with Rick in advance of this week’s Alzheimer’s benefit gig, an event close to the band’s collective heart, to find out just how they’re taking to all the change…

Congratulations on the new baby. How are things as a new father?

A bit tired and emotional. She’s not too bad at sleeping, I’ve just put her down for a nap and I’m a bit frazzled, but we’re getting there. I’m really going to miss her when we’re off on tour.

How did it feel for you when Alan stepped in to your shoes for those tour dates? Was it difficult watching someone taking your place?

It was weird when I sat down in front of a computer and watched a live set streamed from over in Germany, but I can’t think of anyone better. Alan’s one of the best drummers I’ve ever come across, and I was watching it going ‘Oh God, he’s better than me, I might not have a job next week’. But yeah, I was really happy he could do it, but I can’t pretend it wasn’t really weird watching the band with someone else doing my job.

It seems like a time of change in general for the band. From the outside, Charlotte’s departure a few years back seemed a little controversial. How did she end up coming back in for the tour?

Well we’d decided to do a Free All Angels tour. We knew Russell was going back to Bloc Party. We’d been doing some writing around that time, and we’d always stayed in touch with Charlotte. We just thought we might as well ask her, and if she said no we hadn’t lost anything. It seemed a great way to do it, with the original line up of the album. Plus, there were a few songs from Nu-Clear Sounds that we couldn’t really do without Charlotte, and a few fans thought of those as their favourite songs, so they’ve been in the encore.

Is it generally okay being spread across the globe?

Surprisingly, it’s pretty easy. Generally when we’re recording we’re at the studio in New York, and the majority of the touring is in the UK. When we play in America, I go to New York first and we rehearse and then we go on from there. It’s not too bad.

Russell’s been having a bit of a hard time since he went back to Bloc Party. Have you had a chance to talk to him?

Not really, we only know what’s been in NME and stuff. We’ll give things a while to calm down and then get on to him and see if he’s okay, and what’s going on. At the minute I’m not really sure what’s rumour and what’s true, but he deserves some space.

Can you see him ever coming back, should Bloc Party fall apart?

Oh yeah, we absolutely love Russell, he’s a great guitarist. It worked really well, he’s a great guy to have on the road. We’d have him back in a heartbeat, and I think he had a lot of fun as well. He knows there’s always a place for him in Ash if he wants it.

You’ve been a band for more than 20 years, which – as you started very young – is more than half your life. How does it feel looking back in things?

I actually don’t look back very much. When we wrote something new, we used to sit back and listen to the whole back catalogue. Now it would take days to do that, and I think we’ve always been keen to kind of push on with new stuff. Doing the ‘Best Of’ and doing this tour has forced us to look back a little bit, but it always makes me feel a bit uncomfortable. We’ve played shows with people like [now defunct] Panama Kings, and they treat us as heroes, perhaps a bit like we’d have treated, say, Therapy?. It’s great but it’s also kind of weird. As a band we always want to go out and forget about what we’ve done in the past and do something new, to stretch ourselves again. I guess it’s a good time at 20 years to look back, but we’re not sitting back. The A-Z [singles series] is probably the least conventional thing we’ve ever done. Then again, the ‘Best Of’ was probably the most conventional. We started off with a really alternative background, bands like the Pixies, and we never expected to get a number one album or anything like that. That was a bit ‘what’s going on?’, but it was definitely a major moment. There’s not really any chance of getting back to that position without the Britpop thing. What you have to remember, though, is that we had to pay to record ‘Shining Light’ as the record company didn’t think it was a comeback single.

What is it that’s held you together and kept you successful for all this time? If you were to give advice, for example, to the big newcomers Two Door Cinema Club, what would you suggest to them?

I think we always had the ambition to make it last. This is a life that we’ve chosen, to be a professional band, but I think it’s probably more to do with Tim’s vocal ability with a melody than anything else, musically anyway. We’ve somehow managed to stick together as a band, too, which is unusual. We’ve had our ups and downs, but we’re like a family. The personality of the band seems to work really well. Other bands have lots of line-up changes, we’ve had a few but we’ve always had the same three of us at the core of the band.

I’ve heard Mark talking about never releasing another standard album. So far you’ve done the A-Z and you’ve done the left channel/ right channel track with We Are Scientists. Is it going to prove difficult to keep that up?

I think we’re all surprised that a few more bands aren’t doing crazy ideas and different ways of releasing stuff. I guess we’ll see if that happens. We’re not really sure what will happen with the next project, we’re not set on something yet.

Playing a track by two different bands through two sides of a speaker set is an odd concept; how did you come up with that?

We were big fans of Gorky’s Zygotic Mynci and they actually did this thing where they had one song coming out of one speaker and another song coming out of another speaker, and it just sounded crazy to me, having two songs playing at the same time. It was really fun to do, me and Andy Burrows [We Are Scientists/ex-Razorlight drummer] were in the studio one day, and we talked about how to do it, and how to avoid treading on each other’s toes. It gelled really quickly between us, I’d love to do some work with them again.

That We Are Scientists joint track was for Multiple Sclerosis, and the upcoming gig at the Ulster Hall is for Alzheimer’s. Do you get asked to do a lot of things for charity?

Actually this is something that’s quite close to Tim’s heart. His dad has Alzheimer’s disease, and he really wanted to do something to set the ball in motion himself. It’s Tim’s thing but we’re more than happy to be involved, and I guess there’s something similar with Neill Hannon, too. It’s something that’s very close to our hearts. It’s going to be a pretty emotional night. It’ll be heavy but it’ll also be a celebration of Northern Irish music.

Ash will be joined by The Divine Comedy, The Undertones and John D’Arcy to perform an Alzheimer’s Society benefit show at Ulster Hall on November 3. The gig is part of Belfast Music Week. Tickets are £20 and available here.