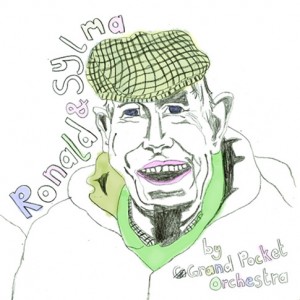 Having found their niche through sheer wondrous oddity in debut The Ice Cream, Grand Pocket Orchestra became a jangly, upbeat ode to carefree power-pop. ‘Odd Socks’ was a clear highlight of the debut: a jangly mess of a track that held together with the kind of hooky chorus that wedged itself deep in the cerebrum for hours. While Ronald & Sylma lacks a stand out track of such standard, the overall quality comes across as more refined and markedly higher.

The calmer approach to musical construction on offer here isn’t to say that GPO’s latest is all that toned down. There’s merely less of a relentlessly summery feel, while the occasional mini-ditty surprises with a mellow angle. Some tracks are bursts of instantly loveable quirkiness, while others spurt off down dingy alleyways – featuring abstract muffled angst through the vocals – and are difficult to connect with at all. ‘Looking Glass’ wins the dubious honours of being perhaps the most absurd moment, a 90-second ditty with helium-ish vocals and a hollering style. Backed with jangling guitar, it’s slightly jarring, a touch solemn in structure, yet still demands repeat listens.

If Ronald & Sylma has an ‘Odd Socks’, single-ready moment (and despite that tracks’ success, they’ve never really been the types) it’s ‘Pinkywolf’, a song with a cluttered shambles of a chorus that, somehow, still comes across as both coherent and brilliantly complex. A rare foray into relatively conventional strong construction comes in jingly album closer ‘Sandra’, though it doesn’t pass without forays into wacky high-pitched territory along the way. Ending on relative normality is a stroke of genius, as it seems to tie together every moment of colourful unpredictability that lies in its wake.

With so much cluttered, bubbly gloss on the latest effort, though, the effect is still a little ‘through the looking glass’ to make sense of comfortably. Perhaps that’s the point. The mini-track format will still have Paddy Hana leaping like a certified nutcase live, and the jingly percussion will continue to split opinion heavily. Just like The Ice Cream, this album’s probably going to leave most a little dumbfounded, yet on the band’s stated mission, ‘to write happy songs about not so happy things’, we can only assume they succeed. In truth, Paddy’s lyrics are so sporadic and off-the-wall that whether they are sad or not is not an easy thing to pin down. What’s certain is that this child-like, messy production – whilst far from accessible – has plenty of easy going charm. What’s equally certain is that it won’t always be uncovered with great ease.

As for Ronald & Sylma? Apparently they’re the producer’s grandparents. In the world of Grand Pocket Orchestra, that somehow makes perfect, nutty, loveable sense.