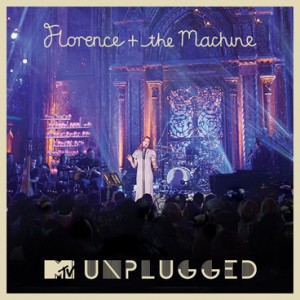 On paper, as anyone who attended Florence & The Machine’s Olympia double-header back in 2010 can attest, the prospect of a second live album (following last year’s iTunes only release Live At The Wiltern) from Ms. Welch is a wondrous one. While debut album Lungs – accompanied as it was by incredible mass exposure – no doubt remains the astonishing vocalist’s calling card, her ability to evoke intense emotions with her note perfect live renditions have never been too far behind. Sadly while MTV Unplugged is strong throughout, it never really threatens to capture the wow-factor of the live experience, or to match the evocative depth of her studio efforts.

The main issue is that this seems to fall flat, largely deficient in the sheer vocal power that won over so many. As the well-established (and recently, fading) ‘Unplugged’ tag suggests, this latest effort is intentionally toned down, with instrumental backing at a relative minimum. Where the usual soaring choruses of ‘Drumming Song’ would kick in, for example, we find Florence’s voice backed by a choir and a carefully crafted string section. The iconic ‘Dog Days Are Over’ still sends shivers down the spine, despite distracting audience clapping, but lacks that that powerful, chorus-opening blast that made it such a great track in the first place. That’s where the flaws in this album lie: while the quality of Florence’s voice is inarguable, these mellow arrangements are not really all that delicate. They’re just quieter, lacking a whole load of those special crescendos. At times, that gives the entire album a cluttered feel, particularly on a couple of the supersized, obvious moments lifted from Ceremonials.

That’s not to say this is a bad album, of course. Fans will lap up the emotion on offer in sparse closer ‘Shake It Out’ and the emotive covers of soul classic ‘Try A Little Tenderness’; touching, but again lacking that wow factor, and struggling to live up to Otis Redding’s seminal version. The Josh Homme collaboration, Johnny Cash’s ‘Jackson’, falls a million miles from either’s more typical musical output, and while Florence fills the country-twang aspect well, offset by Homme’s uncharismaticly mellow backing vocal, this is a far cry from Ms. Welch at her sensational best. The biggest exception, perhaps, is a seriously haunting version of ‘No Light No Light’ that’s a subtle, touching and ethereal as anything Welch has put out so far.

Take these songs as one offs, or perhaps even as mellow asides in a more full-on gig, and they’d no doubt come across wonderfully well. Put eleven of them back to back, and, despite the expected moments of glistening brilliance, moments when Florence’s voice just blows us away, the end result is still lacking. To be blunt about it, without those changes of volume, quirky instrumental backdrops and blasé corners when Florence seems to be revealing her soul so emphatically it almost flows into the listener, the overwhelming feeling is an entirely different one. As fans, it’s a tough thing to say, but after a couple of listens we’re just a little bit bored.