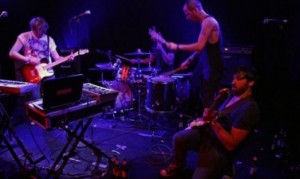 Now in its third year, First Fortnight doesn’t need us to tell you how well thought out it is. Of all the oft-forgotten yet important social taboos to target, mental health is clearly still more essential during an economic near-apocalypse. Setting up in early January, a time that’s notoriously gig deficient, was a stroke of genius, and the pricing policy – either five or ten Euro for line ups that would normally cost substantially more – feels just a little like a late Christmas present.

Tonight, the last night of the festival, feels exactly like a closing party should: crammed, messy, enthusiastic, and with just enough references to the cause behind things to remind us of why we’re here. dRea open proceedings, sounding like an experimental mash-up between Oasis and Joy Division: a touch laddish, solemn, moody and occasionally pulsating. dRea’s charisma does seem to centre heavily on their frontman, giving the live show a bit of a dull feel around the edges, but they do offer something that sits a distance from Dublin’s musical trends, and that alone makes them interesting. The strength of anthem-focused song writing on their best track or two make them serious ones to watch; a distant feel to the show and a mid-set lull assure us they’re not quite there yet.

Cashier No.9, a Belfast band of ever-growing repute, recently found themselves nominated for the Choice Music Prize. While the album has suffered a few ‘middle of the road’ allegations recently, that idea’s quickly dispelled live. There are hints of multiple genres spattered through tracks from promo-only EP ‘Goldstar’ and album ‘To The Death Of Fun’, largely of a country or folk-pop format. A brilliantly varied array of backing tracks, one of which sounds not unlike The Prodigy’s intro to ‘Breathe’, really liven things up. The band’s harmonica player Phillip Wallace is particularly exceptional, playing off the weaving vocal harmonies of front man Danny Todd and his gorgeously off-key sidekicks. Aside from the most quirky of musical backdrops, Cashier No.9 won’t win any awards for gobsmacking originality, but as long as they keep reeling out catchy pop songs and performing with such gusto that’s not going to temper our interest.

Third act Royseven – based on numbers pushing towards the front, at least – appear to be tonight’s main draw. With ‘We Should Be Lovers’ having become a huge Irish radio staple over the previous few months, the six-piece certainly seem to riding a wave of popularity. Front man Paul Walsh is the obvious stand out: a flag waving ball of charisma whose on-stage antics and tight vocals are eminently watchable. Having never caught the band live before, we’re initially impressed, but as the set builds, Royseven’s disappointingly ‘samey’ sound becomes more and more apparent. The singles are clear stand outs: ‘Dance’ leads to a mini pogo riot, and ‘We Should Be Lovers’ goes down so well it gets a second airing to close the set. The latter only serves to emphasize the one-dimensional style of what’s otherwise a very tight sound. A shame, as Walsh’s front is exceptional, and the variety added by a couple of changes in direction would make all the difference. Eight years into an already successful career, though, we suspect their brand of power-pop isn’t about to be overhauled.

For all their recent acclaim, Le Galaxie remain something of an ‘in the know’ band in Dublin, in part simply because they’re not about to grab Royseven’s radio marketability. Their growing live following, though, is a reflection of the band’s strengths: Le Galaxie are all about the frantic, sweatbox feel they bring to their hefty, beat-driven live show. They’ve left the ‘tune’ signs and glowsticks at home tonight, but at this stage Le Galaxie are very much ‘no props required’, happily smashing to pieces the clichéd ‘stuck behind their keyboards’ problem a lot of electronic-based bands never surpass live. Frontman Michael – a hooded, brooding monster of a live presence – dominates proceedings, be it in his crowd-bothering barrier interactions or in the contorted shapes and morphing, twisted vocals he delivers over the top of all the beats. While ‘Midnight Midnight’ remains their most recognizable outing, less melodic efforts like ‘Solarbabies’ and ‘Beyond Transworld’ define the pulsing live shows, providing pounding crescendos in a driving performance that rarely lets up for even a second.

They might have missed out on the Choice Shortlist – alongside Fionn Regan, perhaps the most surprising of omissions – but Le Galaxie’s late night, Buckfast-crazy live aural assaults still consistently blast their way far beyond the levels most acts achieve even at their very peaks. Tonight, they’re an advert for a different brand of mental health: total, joyful, mind-melting dance-floor freedom.

As published on State.ie, January 2012. Photo by Kieran Frost.