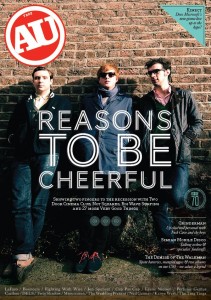 It’s tempting to make flippant remarks when another print publication has to close its doors these days. After all, they seem to be closing at a rate of one a minute; the funding – and general demand – for print content seems to be steadily edging downwards, and  an Internet-only (or at least extremely Internet focused, with minimal print publications) industry seems to be the way to go (watch this space, though – a team’s already in place that will be making a substantial effort to buck the trend in Dublin shortly). “Another one bites the dust” will no doubt be getting an airing today as the Arts Council pulled the plug on a near-decade-old print publication, in Belfast’s AU Magazine. Having written for the mag for the past two years (I’ve had content in every one of the last 20 issues, and had my first review published in February 2010), I first heard about this yesterday, and I’m not finding it an easy thing to deal with.

Now, of course, as a regular contributor to AU Magazine, I’m probably a good deal more upset about this than the average Joe. No writer’s ever happy to lose one of their gigs, and I’ve always had a preference for seeing my work in print, rather than on the Internet. There’s just something nicer, something more official about it, and while I know well that it’s not the case, it always seems like having something in print defines you more as a professional writer than a hobbyist. I’ve got plenty of other print stuff, of course, but AU Magazine has always been one of my favourite publications to read, and – referring to other people’s contents rather than my own – I would certainly rate is as strongly, if not stronger than any other music-covering magazine currently on offer in Ireland. It’d give most of the major UK mags a run for their money, too.

What bothers me more, though, is AU always felt like it was a community; like it meant something to everyone involved, and like those at the top genuinely cared about the content they published deeply. There was no chasing of populist stories; a lot of the coverage was given to comparitively small acts. Take my word for it, that was not for a lack of big-name options. There was a huge amount of support for a range of local scenes, with AU even having an impact down here in Dublin over the last year or so, after expanding their distribution. The entire thing was epitomized wonderfully in the Northern Ireland Music Awards (NIMA) last year. In hindsight, going down that night was a great decision, I’d really have regretted it if I hadn’t.

From a writer’s point of view, editor Chris Jones was both incredibly straightforward and helpful (it’s amazing how many editors make life difficult for their writers, and not always in a way that will benefit them in the long run), and almost invariably had something constructive to say. He’s been teaching a journalism course recently, and his students will learn a lot, as Chris really knows how to pick on the weaknesses in your story without coming across as if he’s pulling you apart. He’ll be out of a job as a result of this, and if you happen to be reading this and need a new editor, I’d strongly encourage you to snap him up, especially if you’ll be covering music. The man knows his stuff, and he knows how to make sure other people put it across.

I’ve been meaning to hang a copy of the 70th issue of AU Magazine on my wall for a while now, but then that goes for a few stories that I’m particularly proud of. I was asked to cover Northern Ireland’s biggest modern-day stars Two Door Cinema Club down in Dublin, spending a day with them at the Late Late Show, a Friday night television show that’s a real institution in Ireland (and rubbish most of the time, as far as I can see, but it was still one hell of an experience). That story was probably one of the coolest I’ve got to do in music. I’ve also been to the UK to cover Reading Festival for AU, gone up to Belfast multiple times for gigs and events, and interviewed the likes of Manic Street Preachers, Ash, Rival schools, Grouplove, Rubberbandits, The Joy Formidable, Cloud Control, Twin Atlantic, The Cast Of Cheers and a whole lot more for their pages.

Of course, things aren’t entirely over, but even with the commitment to continue AU as a hobby website (I certainly intend to carry on with them), it’s hard to see how it will compete with the same status it’s had until now. There simply won’t be the time or the budget behind the website that was behind the magazine. It’s hard to see a comeback – while AU’s website has always been a great resource, it had three full-time members of staff behind it, as well as countless freelancers, and the recent reduction in quantity of content on other Irish music sites demonstrates just how hard it is to keep something that in depth going as a hobby. I’m most sad for the editors; they’ve done an amazing job, but been faced with what I can only assume is an insurmountable financial hurdle. I’ll miss the magazine hugely, and I’m sure plenty of others – especially up north – will, too. Most of all, good luck to Chris, Jonny, Andrew and everyone else at AU in moving on, somehow, to something even bigger and better.

It was fantastic while it lasted, and I’m proud to have been part of it.