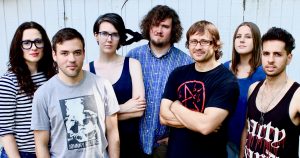 The style isn’t quite what it used to be, though. In fact, Brown cites some surprising influences for the forthcoming album, three tracks for which already feature in the live shows on the current tour. “Pantera, Metallica, Iron Maiden, the stuff I was into as a kid is all in there,” he explains.

“No one in the band back at the start could play the music we write now, and I include myself in that. We’re a lot more technical, much stronger musicians.”

Brown laughs when I point out the irony of his band’s musical progression coming well after their biggest hits. “I guess that’s the thing with music, it’s not always about how well you can play. I’m not really interested in chasing the zeitgeist. When I’ve tried to do that kind of thing in the past it’s never worked. It’s much better we just do what we like.”

“What we do depends on where we are. We can do the nostalgia set. Sometimes we play a set that’s taken mostly from album six, too. There’s a Rush cover we like to do. We’re good for it all.”

Wheatus play The Grand Social, Dublin on November 29 as part of a six-date Irish tour.