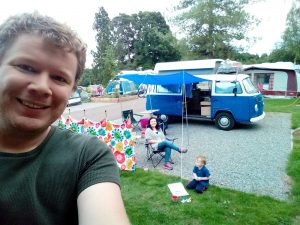 Further along the road – but better accessed by a winding trail that takes you into a cliffhanger of a footpath through the trees – the Gower Inn is all meat and two veg and local beer, a gigantic rural pub that’s taken on a culinary bent, and draws the crowds for miles around.

Not everything has to be on foot, of course, though in a place like this, it can be. The van takes a bit of packing up, with bedding stuffed into corners and the chunky awning shoved uncouthly into the back seat, but a half hour drive to the less rustic seafront of The Mumbles is worth the effort.

There are counterless outdoor stores just in from the faded seaside glamour of the picturesque, throwback walkway. They take in crazy golf and watersports, a rugged old pier complete with penny slots and Sega-era arcade games, and the unmissable fish and chip shop.

The pace is slow: the van makes groaning noises once it tops 100km/h in the Welsh crosswinds. Once you stop, the entire pace of life seems to crawl along, all gentle strolls along the water, with breaks for coffee and time in the park.

Back in the campervan, we snack on currant-packed Welsh Cakes and absorb tea heated over a shaky gas-fired stove. The advantages are obvious: the kids commute from the football pitch directly to a bed constructed over the two front seats. They collapse shattered at the end of each day from an overkill of fresh air, sand freshly washed from the ears, but happy summer memories more firmly wedged in place.

The wine and books come out around the fire, the hilltop breeze nullified by the knowledge that a heater, duvet and shower wash away the day’s activities. There’s still not much luxury to be had in campsites, but there is comfort in the hippie-chic, and a real sense of re-engagement with the world outside our windows.

GETTING THERE: Fly to Bristol with Ryanair and then hop on a train to the Welsh coastline, or take the Dublin to Holyhead ferry and drive south.

GETTING KITTED OUT: BeaconsCampers.com have a range of appealing campers, old and new, to explore the area in. Campsites, including Three Cliffs, typically book up very early, especially during weekends and summer breaks. They’re affordable and generally cater to the basics: the sea is your pool, but you get hotel-standard bathrooms.

MORE INFO: Learn about Swansea Bay and The Gower by visiting visitswanseabay.com

As published in the Dublin Gazette, October 2018, see below…

Wales And The Hygge Of The Hillsides: A weekend In The Brecon Beacons