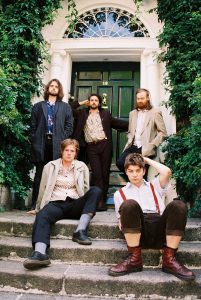 “We recently took over BBC 6Music, which was really surreal,” O’Connell says of the band’s finest off-stage moment to date. “It was so strange to do. We saw it as a chance to raise a flag for the Irish scene, so we played a lot of Irish stuff, Dublin stuff. It’s difficult to get a bit of success here. Sometimes we’re characterised as a bit of a backwater of the British scene. There’s so much good music here.”

“That said,” Deegan interjects, “we never wanted to be another Irish band only playing at home. Luckily, the characters we use in our songs seem to travel.”

“It’s like Ulysses, a little mythological,” he reflects on Fontaines D.C’s scatty but charismatic take on the Liberties locals. “It’s the gravity of the ordinary, making people of central focus and importance.”

“We’re best friends, and we’re very used to the touring life now, which makes this a whole lot easier. We really love it. The album will be coming sometime in 2019, and then the touring will be heavy after that.”

That won’t be something new. “We’ve been hanging around a lot with (notoriously impressive live punk band) IDLES, O’Connell concludes. “We keep turning up in the same place and find ourselves just hanging out. They’re like big brothers. I guess we’re learning from the best.”

Fontaines D.C return to The Liberties to support Shame at the Tivoli Theatre on November 21, as part of their pan-European tour.