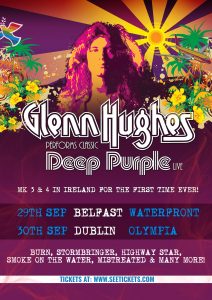 Deep Purple, including Hughes, were inducted into the rock and roll hall of fame in 2016, and have mostly mended their differences that came about in part because of Hughes’ personal issues all those years ago.

“I thought it was overdue. I don’t want to sound arrogant, but it needed to happen, brother,” Hughes said of the Hall of Fame induction with his former bandmates. “It was a good feeling. Deep Purple have such longevity as a band, and sold 150 million albums. It’s good to be acknowledged for that, you know? It doesn’t really matter, at the end of the day, but it felt good.”

The live performance is still where things are most natural for Hughes, though. “We’ll be ready by the time we get to Ireland,” Hughes says of the tour, which stops off in South America and at a series of festivals over the summer ahead of the Irish dates.

“We’ll be playing lots of big stuff, like Smoke On The Water, that I used to play with the band all the time, and some stuff I’ve never done before from the Mk II and Mk III era.”

“I just want to make the most of it. This is a big thing, an 18-month tour, all in, that’ll go right into 2019. I want people to know what I’m doing now. I’m doing all this studio stuff, but when I’m not doing that, I’m doing things like we did in the 70s, with the audio and visual elements like back then. Things are arranged just like they were, and it’s one hell of a show.”

“I can’t wait to do this, it will be a real treat, something for everyone who’s into Deep Purple, brother,” Hughes concludes. “It’ll be special.”

Glenn Hughes and his band will perform classic Deep Purple tracks at the Olympia Theatre on September 30.