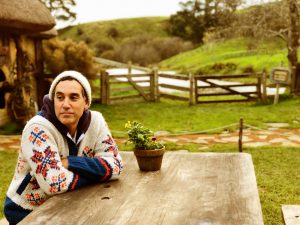 The independent aspect of what Radin does has really kicked on in recent years, with his major label years long in the past. He produced his own music on latest album ‘The Fall’, released in early 2017. “I really found the experience rewarding. I’m not sure about the next album though. I’m still thinking about how to produce it,” he says of working alone for the first time. “I’m in the thick of it now, with regards to the writing process. So it’s difficult to say how it will turn out at this point.”

Unsurprisingly, the mid-westerner most comfortably with a guitar looped over his shoulder relates heavily to the Irish music scene he first encountered touring here in the mid-00s, when Dublin was incredibly ‘man with guitar’ heavy, producing some of the best acoustic guitar albums of the era.

“I’m sure some Guinness will be imbibed in Dublin on night one,” he jokes. “I really do feel the tradition in Ireland and always have. Ireland was one of the first countries outside the US to give me a shot and play some tunes of mine on the radio years ago. So I’ll always appreciate the place and return for as long as you’ll have me.”

“The highs and lows of musical life can take their toll, but usually I just care about playing in a room whereby everyone is respectful and listening. I just hope to be able to continue to do what I love without thinking about the business side of music. To keep writing and playing songs for people all over the world. To stay curious. When you lose your curious nature, your artistry dies a quick death.”

Joshua Radin and William Fitzsimmons play a double headline show at Whelan’s, Dublin on September 30. Tickets are on sale now for €25.