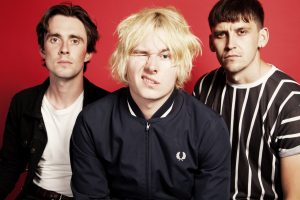 w far off is an album, and what should we expect?

Not that far off on the album, we’re writing a lot, it will be a combination of some old songs and new songs and some brand new songs. We want it to represent the whole sort of spectrum of the band since it began. We also want to range from our heavy riff, all-out side like ‘Wrap Up’ to our more delicate side like ‘Said and Done.’ We don’t want to be the same thing for 12 tracks, that would just be pointless and too many artists do that. I want it to be able to date well, and we want it to be able to be some sort of a journey, as well as experimenting on it a little bit too. Next year it will be out. 2019.

Is it tough to produce an album when you’ve already got years of songs behind you?

Yeah, but it pushes you further, and yeah there will be a few old songs and some that will get re-recorded, but it pushes you to continue to write. I think it’s a good thing. It’s a different time though isn’t it? I mean a few EPs for a band is now the same sort of thing as a band putting out a debut album – that’s the process now. You used to get signed to an indie or you know do-it-yourself, smash out an album and go but now it’s a few EPs then your debut. It can be tough but you’ve got to keep rolling when you’re in a creative mode and we do that well as a band, when we gel writing-wise, we just keep jamming and good stuff comes out.

I get the impression you’re pretty proudly political. Given the current state of world affairs, it’s surprising there aren’t more extremely political current acts. Do you believe music still has the power to change? What’s your key message?

The world is an utter state and without sounding bleak, I just cannot see it getting any better. There’s political artists, just none that enter the mainstream, I don’t even think that you have to have overtly political lyrics to have an impact, some of my favourite artists don’t have in your face political lyrics, but they have beautiful engaging lyrics and melodies that open your mind to anything, which opens your mind to politics – we don’t even have that in the mainstream charts. I think music will always have the power to change, I’m not sure if it has the power to change on a mass scale like it used to, just because of the internet really. I think it would be difficult for a mass cultural phenomenon to occur because the internet sort of cuts and spreads and scatters everything doesn’t it? I might be wrong, I hope I’m wrong.

Our key message really is individualism, think for yourself and be critical of everything you read and see and be critical of your own set of beliefs and values from time to time, do not see the world in black and white, look for the context and nuance, engage people you disagree with and agree with, stand up for freedom of expression and against censorship, social media politics amounts to nothing but a virtual pat on the back and emptiness 90 percent of the time – don’t live in an echo chamber and never worship a politician, ever. Absolutism is the enemy, and our behaviour towards politics currently is like an organised religion or nationalism, extremely tribalistic and absolutist which I think is a tragedy. I’m a staunch leftist but the right are rising and it’s terrifying. I’m not convinced the right is rising because they are doing so tremendously well at winning people over, I think the state of the left is more obsessed with forcing an apology out of a celebrity than trying to convince someone of their arguments.

Do people often misunderstand your lyrics?

Erm yeah sometimes, but sometimes they’re pretty much bang on. Some of my lyrics are pretty hard to understand what they are about anyway, but I like that, sometimes it’s good to get people to just try and work out what I’m singing about, give them an interpretation you know? No one has misunderstood to a major point, but to be honest I think apart from the more obvious ones, half the time most people have no idea what I’m singing about.

Normally, I’ll write the basis of a song, bring it to rehearsal and we will just jam on it relentlessly until we’re all happy with it, then I’ll write the lyrics along the way or pick stuff up from little lines or poems that I’ve played around with. That’s really how it starts. Barney and Jake have done their fair share as well, Barney has contributed heavily to a lot of new stuff and Jake wrote the solo in ‘Fall Around’ so there you go, we’re a unit. But as a general rule of thumb, I’ll write the lyrics and have
the barebones of a track and go from there.

Your reputation seems to stem a lot from live performance. Would you say you’re primarily a live band?

Yeah, but we take the songwriting just as seriously. One of my biggest annoyances about the current kind of ‘punk’ or alternative or whatever you want to call it, is that sometimes they just have no tunes at all, people talk about how incredible they are live, but their songs are utter dogshit. Strange Bones are a band that aren’t like that, they are the most punk band I’ve seen live but also you can sit and listen to them because they also write actual songs with hooks and interesting lyrics. I’d like to think people could say the same about us, we are becoming known for our live performances which is great but we’re very meticulous about our songs and our music as well. I wouldn’t want to just be known for being a live band, but yeah, our reputation for our live shows is growing, which obviously we’re not going to complain about. Please do come and see us haha.

Are you still practicing in a storage container? How did that come about?

Yes, we are. We were just sick of paying through the nose each week to practice and a mate of ours I used to be in a band with practiced drums in this storage container and he kitted it out with carpet and some sort of soundproofing. Then got a job and moved to Belgium so we took over, but we aren’t serial killers and there are no dead bodies in there, well not yet anyway. We’ve nearly killed each other a couple of times so it is possible.

The Pope is visiting Dublin a week before you, for the first time since the 70s. Unlike the 70s, its being strongly protested. You don’t pull any punches on religion – do you think it’s dying a death?

I hope so, it’s dying a slow death if it is dying. I mean it’s not dying in some places and it’s not in others, it’s not really dying in the middle east is it? I don’t pull any punches on religion, mainly because it’s carved itself out a little section of society where people take huge offense to it being criticised, even if it causes people that are good to believe in wicked things and is based on oppression, sexism, racism, hatred and ultimately evil. I think we need to engage people more in debate, I genuinely love debating with religious people or religious apologists, especially if their open to discussion.

I think it’s important to engage people and try and change their minds, but religion has unfortunately carved itself out this little section where criticism of it is in some-way wrong? It’s utter nonsense. The burka debate currently, you can oppose anti-muslim bigotry and also be critical of the burka, you can oppose the ban of the burka but still be critical of it, that’s the sort of society I want to live in. Not one where debate and discourse is just shut down instantly. You can hate a belief system but not hate an individual, it’s constantly conflated (often on purpose to stop debate or ridicule or engagement of any kind) and it does my fucking nut it. It’s a horrible world.

Every time we’ve played away from England we’ve been treated beautifully so I know it’s a boring answer, but it is the genuine truth. It’s our first time in Ireland, Jake’s family are Irish though so we’re expecting a warm reception (hopefully). I hope the tradition of being received well outside of England continues.

What should people expect from your Irish show?

High energy, maybe some drum jumping, possibly blood and a place to lose yourself for 40 minutes
and get something out of your system.

1. The lyrics of ‘Retina’ were originally based on taking too much acid by accident
2. ‘Fall Around’ came from me trying to remember how to play ‘Bottle Up and Explode’ by
Elliott Smith
3. ‘Wrap Up’ was originally meant to be three different songs but I just put them into one.
What are your future plans?

Tours, album and lots of other goodies behind the scene which will be revealed soon.
Thank you for having me.