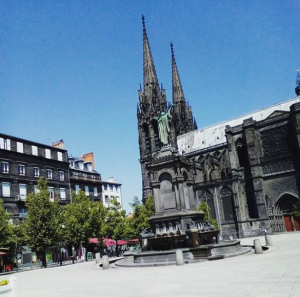 What a wonderful, wacky, memorable band. Superorganism didn’t even meet before they put out their first single last year, which they developed online. While they now share a house in London, they still write their songs largely by sending ideas to each other from different rooms via their computers. They explore some odd themes, taking in sea creatures, life’s hardships, the hunt for fame, and pretty much any other concept that crosses their minds. They claim to have 50 albums worth of material already, and what we’ve seen of it so far is absolutely mad, in the best of ways. See their NPR Tiny Desk concert, below, for the evidence. The stage moves were on point, too. Fantastic.

If you know me well, you’ll know the Eurodance thing doesn’t really do a whole lot for me. These guys, though, are one of those tropical-island chill out kind of acts that kind of mellow their way through their beats with a real atmospheric sense of Balearic-like place. I can’t imagine I’d ever sit down and listen to an album outside of a beach bar, but live in the Clermont-Ferrand heat they were enthralling. A big live reputation is well deserved.

A spaced-out, organic trip-hop band from Austria, 5K HD are a floaty, imaginative but laid-back act with subtle jazz influences and plenty of playful percussion. I think what I liked the most about them was their willingness to settle into really mellow rhythms even if it meant band members doing nothing for a while: a kind of affected minimalism with plenty of clever little twists along the way: bits of it were a little ‘Nintendo 64’, but enjoyably so.

A confession: it took me half a set to decide if I actually like Sheep Got Waxed. They are madly inventive, distorting rhythms, jarring melodies and generally taking a spectacularly freestyle and sometimes slightly disjointed approach to the way they produce their music. That music is a kind of jazz/ post-rock/ ambient experiment which is unselfconscious and a little bit trippy. At times I even found it a little bit uncomfortable to listen to, but there’s a lot to be said for challenging music, and these guys have some wonderful moments.

Robocobra Quartet: “We have a kind of Jekyll and Hyde thing, like a Trojan horse”

Alex Tierney: “I was just hanging out at home and within a couple of minutes I was preparing for my biggest gig so far”

Hinds: “We have always loved live shows, we toured almost the whole world before putting any albums out”