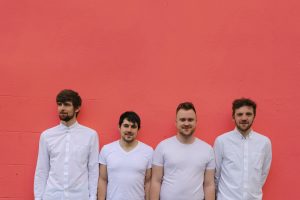 The album, then, is as much for the band as it is for their audience. “It’s for yourselves really, for having a real body of work,” Donohoe says. “In the early years there were a lot of line up changes. We were referring to ourselves as a ‘skindie’ band back at the start – ska indie – but that’s all in the past.”

“The experience of gigging together for ten years, part time and full time, on and off, has pushed us to stop it right here, and ask what are we now? Can we define it in a record at this stage? I don’t think we ever felt like we were in the place to write an album before. An EP felt more temporary, something to try out sounds. But we never quite felt we’d nailed it. It’s a big step, people start taking you seriously when you put out an album.” 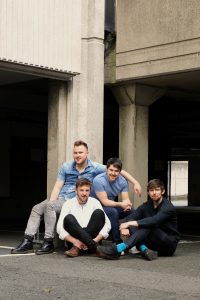 Unusually, the album will exist in only two forms: digital, and vinyl, with no option to buy it on CD. “I don’t own a CD player, and my laptop doesn’t have a CD drive,” McCabe explains. “I still get CDs, but strictly only for the car. We did a small bit of market research and it seems to be the case for a lot of people. It felt like throwing money down a hole.”

“The vinyl is a work of art,” Donohoe adds. “That used to be the case with the CD, with the big book with all the lyrics. But we thought the vinyl was important. If you’re just online, you’re kind of just existing in this ‘fake’ world. Which is kind of what some of the tracks are about.”

Heroes In Hidings tracks, in fact, have never been conceptually obvious. They tend to avoid the musical tropes, things like love songs, or tracks about drinking and friends. Not long ago, a single, ‘Casanova’, talked about going home with women because of a fascination with seeing their bedrooms, rather than the activity that might take place there. Naturally, the band say it isn’t based in reality.

“That was 2014,” Donohoe says of ‘Casanova’. “We were trying to find slightly more interesting ways of telling stories. With that one, we had the main hooks in the chorus, and we’d decided it was going to be called Casanova. All the typical kind of Casanova love songs just seemed a bit boring. Joe wrote the line, the hook, for Casanova, but I don’t think he had in his head that it would be about bedrooms. Liam took on writing the rest of the song, and then that idea came up. In some ways, it is a love song. It could be quite stereotypical, but that’s not interesting to us, so we put a twist on it.”

The new album is similarly diverse, delving into internet fakery. That fits well with modern political discourse, though not entirely deliberately, as many of the tracks pre-date some of the more recent data and marketing scandals.

“It’s a running theme through ‘Actor’,” Donohoe tells us. “Authenticity and questioning not necessarily the big picture, how you live your life, but day to day things. The album touches on the point of the actor being the person you put forward in any scenario. Even now, I feel like I’m acting somewhat to you. But that’s life. That’s what the underlying theme of the whole album is. Every track has a certain sense of that, be it a love story, or a critique of the internet.”

“In terms of gigs and stuff, you do want to put on a big show, lights, and jumping around. I suppose in a lot of ways, that wouldn’t be the most authentic version of each of us. Everyone has a stage persona. You don’t turn up unshowered in a hoodie.”

That’s some understatement for Heroes In Hiding, who have, oddly, almost taken themselves out of a gig in favour of an audiovisual experience once before, a concept they’ll be repeating for the launch of ‘Actor’.

“We thought it would be really interesting to do a project with someone who wasn’t a band, essentially,” McCabe explains. “We did a collaboration with a company called Second Frame Films, working with them to develop this long set, that turned out to be the ‘Curtains’ release. We played the album in its entirety, plus a few of our older tracks. It was one long set without breaks, and we built this big cube we made out of tracing paper and screens, a seven-by-seven metre cube. We shoved everyone into the cube and projected onto the outside, and played outside it, but in the same room. It was kind of an experiment to see if we weren’t there, would the experience be as good.”

“I guess it came back to the Actor thing. The film was the actor in that case. It seemed to work, as it had enough interest to make the music good. Obviously, if you’re in a warehouse in the middle of Dublin 8, it feels a bit surreal. We wanted to flip the live show on its head a little bit. All the screens were failing just before it opened, but eventually, we got it working.”

“The whole thing ran to a click track. We recorded transitions in the studio, and then we played none stop for the whole hour. It would be a bit anticlimactic if it was stopping and starting,” Donohoe adds. “What we want to do this time, if we can, is sort of create half a cube, so you can see us in the cube this time. We’ll lose the sides, but hopefully, it’ll be an all empowering screen, taking in what we’re playing and what they’re showing.”

“So many good bands are getting up on stage and doing the same thing.” McCabe says. “It’s important to do something different. I think the success is already there for me. It’s finished. Whatever happens, happens. If we’re famous in six months time, or it dies, we did it.”

Heroes in Hiding launch their debut album ‘Actor’ at Tivoli Theatre on May 25, performing their stunning audiovisual set. The album is released on the same day.