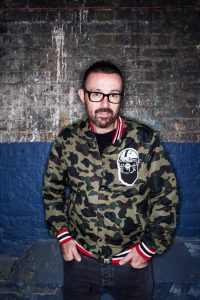 “The focus now is very much on the record, not the people,” he says of today’s scene. “My playlist this week is almost entirely full of people that I’d never heard of six months ago. It’s very difficult to build a career, and very difficult to find people making a lot of good records in a row.” The internet, in a sense, has handed over a kind of equality alongside the potential for viral promotion.

Oddly, in Jules new world organisation amid the chaos has also become critical. “I might do an 18 hour day sometimes with the law and, usually over the weekend with the music. Before I retrained in law again, the only time I ever used it was in knowing what to say to the police when they turned up at illegal parties. As dull as it sounds, organisation has become really important in my work, as I have so many things on the go, particularly on other people’s careers.”

“I have a unique expertise now because I really understand the industry, and I can give people the advice I wish I’d received. It’s very easy to get messed around in music, especially when you have a contract in front of you that you’ve worked a long time for. I understand after all this time what it is to live and die by your reputation. There might be some other lawyers who have been on the fringes of the scene, but I think I’m the only one in law who knows what it is to think like a big artist. People are ready to exploit you. I wouldn’t advise signing anything without a lawyer, there are so many bad people out there in the industry.”

He’s also expanded into his own record label, Judgement Recordings, a hobby that he somehow squeezes between his near-weekly DJ sets and full-time law work. “I just put out records that I like,” he says of the venture. “I’m not trying to make a huge brand, just to give exposure.”

As for that world back in Ibiza? “The main difference today is it’s very much about the day clubs,” Jules tells us. “It’s a bit more traditional and corporate than it used to be, and a lot of the best stuff happens at pool parties. It’s still huge.”

Judge Jules plays The Button Factory on May 6 as part of Affinity’s 4th birthday party, alongside Marco V, Scot Project and Paul Denton. Tickets start at €28.