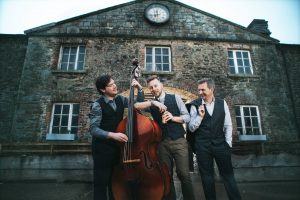 What’s the story behind Muddy Waters?

It’s about dressing up and getting down! 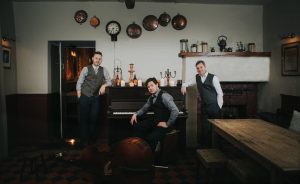 What should we expect from the EP, and when’s it due?

The EP consists of four songs that were formed on the touring circuit. They started off as ideas and riffs that soon condensed into the outlines and concepts of the songs. It was then, with the help of Gavin wielding the hammer, that the songs were forged into what we have in the EP. So in a way, they are diverse but also all come from the same place.

The EP will be out in the next few months but we haven’t set a date yet.

Our high energy performances combine our deep passion for music with a foot-stomping good time!

A few years ago we played a gig in Berlin at a venue that doubled as a yoga studio during the day and realised at 6.30am (when we were still playing) that a group of eager Germans with Yoga mats were queuing outside the door. It made for some interesting conversations on the way out.

I have to ask about the name – why One Horse Pony?

An unnamed member of the band mangled One Horse Town and One Trick Pony on a night out! it stuck!

Who else is impressing you musically in Cork at the moment?

Corks’ live music scene is an amazing melting pot, acts like Jack O Rourke, Marlene Enright, Mick Flannery and Brian Deedy, the list goes on. They’re all unique entertainers in their own right.

What are your hopes for the future?

Short term: Get through this tour and the summer festival season and then get back into the studio in the Autumn to record a new album.

Long term: To continue to deliver the best live gigs we can.

One Horse Pony launch their single ‘Muddy Waters’ at Whelan’s, this Sunday, May 20.