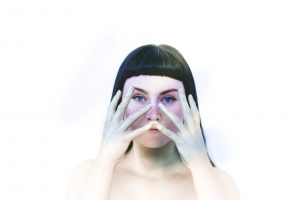 The aim is very much to produce a complete package, and in line with the current stream of modern pop-acts, McCann isn’t afraid to admit it’s not just about the sound she’s producing. “Image is very important. Equally important to the music, I’d say,” she explains. “It all comes from the performance aspect of it, creating this other world. But it’s also a self-indulgence thing for myself. I have a background in youth theatre, I was very dramatic as a kid, so the costumes and the stage setup and the choreography are a thing. Without Ellie it’ll still be quite theatrical, but it won’t be synchronised swimming. I love a full-on performance, like Sylvan Esso or Perfume Genius.”

That all feeds into the need for recognition, which is, equally, not something McCann shies away from. “I totally want to be recognised, I want to make this a career,” she tells us. “I love getting radio play, and getting attention. I want to do something that other people aren’t doing. Maybe that’s big-headed, but it’s what I’m trying. I’m not a deep, introspective songwriter’s songwriter. I started writing so I can perform what I want to perform. It came from a space where I’m a performer and I want to do that, and I love the songwriting now, but I wanted to be able to perform how I wanted to perform, and I wrote songs in that respect.”

“It was covers to begin with, Lykke Li, Vampire Weekend, high-energy buzz music.” Those days are long gone, with McCann deep into her own song-writing process with McIntyre, but the songs are still very much about feel. “The melody and the lyrics are kind of just for me,” she explains. “I’m not a brilliant lyricist or anything. Sometimes I write lyrics for how they sound and attach meaning to them after. Unless I’m very emotional about something, usually the melody and the lyrics come first.”

“Some of these twenty new tracks are a little it darker,” she continues, “a little bit London Grammar-esque. We’re trying to mix pop-dance tunes with that kind of darker electronic side. I’d love to have loads of pop tracks, and then the stuff that you really enjoy performing live, and listen to at home. The pop tracks are still going to be good, they’re going to be electronic.”

“For the first EP, I had no idea, really, I just made up the sound with my voice and we transfigured onto the computer or instrument. For these ones, there’s a little bit of copycatting. I really really love Little Dragon and Sylvan Esso. It’s all I listen to at the moment. I also love Fever Ray and The Knife. I decided to just make these songs sound like what I love. Dan loves the same music I do. I come to him with some synth lines and a vocal line on my laptop, and he’d record it onto his laptop, and he makes it into this banger. It comes from energy, in the moment, really just from being a twat like. Then you record it.”

“I actually record it all on Garageband on my phone, and it’s not even backed up now. I have to do that! Obviously, Dan is doing the production. I’m bogged down a lot in the self-managing stuff, that side of it at the moment. It’s grim, but I want to understand what’s going on. I don’t have any money. I live in Dundalk because it’s cheap compared to Dublin. But we have a little press kit, and the plan is to get stuff out there.”

As for those days back in BIMM? “It’s useful for connections, in the UK as well, as they’re based over there, too. I don’t think I particularly learn much, but that’s not their fault. I think I drank more than I learnt. But I met my band there. Basically, if you want to be in a band you go to BIMM to meet your people. There hasn’t been a big Irish act out of there yet, perhaps, but they have James Bay and Kate Nash over in the UK.”

It’ll be some career if Æ Mak can go that far, but on the back of a UK launch through Rebalance, a musical restart and re-energised songwriting, who’s to stop them?