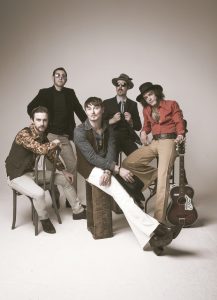 “There’s brass on some of the stuff, too, sparse little melody lines. We’re trying to work on the live stage production as a whole. For the album launch, if you wear a turtleneck and chain, like The Rock [as seen in the video for Cold Cold Sweat], you get a goody bag from the merch stand. They’re actually quite hard to buy now.”

The Hot Sprockets have long linked heavily with Wicklow music Knockanstockan, and point to the non-mainstream style of the attendees being a good fit for their own music. They’d love to move to full-time music, however, and while they don’t really expect all that much mainstream success, it would have significant impacts were it to come along.

“If you’re in the mainstream and making more cash, we could do the things we always dreamed of. We have Cherry Popper Records, and we always wanted to do more with that. If we had the money, we’d get a load more bands, and spread the love,” Kelly tells us. “We’d like to do it the way Jack White did it with Third Man.”

As for the image, that’s become the band’s thing, “it’s just our normal attire,” Cullen tells us. “It’s just from stuff that influenced us, bands we’re influenced by. Mainly 60s and 70s American bands. We wear our best stuff on stage, like going on a date or something. We don’t really pay too much attention to it, but to a certain extent it’s important. You dress up.” 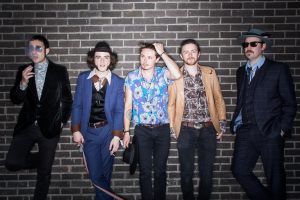 “Years ago, Tim used to work in a vintage clothing store, so he just got sweet clothes for free,” Kelly adds. “We just kind of got mad into the clothes together, and kept doing it.” The result can feel like an authentic shift in time and place: The Hot Sprockets wardrobe would be genuinely hard to track down in Dublin, and sits perfectly alongside their sound.

There’s plenty of silliness to be had along the way, too. When co-vocalist Wayne Soper got married last year, his stag do inspired the latest video, in which the band are seen impersonating The Rock in his turtleneck and chain phase. “We took that idea, we thought it was so funny, we all did that down in Westport and people thought it was amazing. There were about twenty of us lads, the band and other lads, all in the turtleneck and chain on, because we just remembered that image. It’s such a simple thing, and we just decided to use it in a video. It’s a real strong look, it our new thing.”

As well as their local successes, The Hot Sprockets have also been touring fairly extensively in Spain, their very own ‘big in Japan’. “We’re on playlists with both of their national radio stations, so we get quite a lot of radioplay over there,” Cullen explains. “We got a Spanish release of Brother Nature through a company called Folk Records, so we put two tracks of the ‘Licks From The Vault’ release on it. It goes really well out there. We’re back again this summer, to play a few shows, and we’ve been a few times now.”

The band have also been involved in the Repeal the 8th (abortion access in Ireland) referendum campaign, putting together a cover of Wyvern Lingo after prompting from Dave Judge, who runs Abner Browns and The Underground venue.

“We weren’t really all that conscious of getting involved,” Cullen says. “We’re all for Repeal, and we’re not too worried about any fans who might think differently. Each to their own, we just thought it was good to do. It was a good little project to take it on, and I think it turned out well.”

For now, though, The Hot Sprockets will mainly be pleasing the local crowd, one they profess a real love for: those whose hearts screams for the blues, and those who simply can’t miss something so effortlessly, raucously entertaining.

The Hot Sprockets’ latest ‘Dream Mover’ is out now.