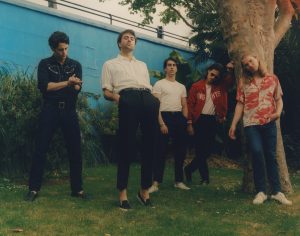 “Pete never really talked about why he left, and neither did the band. The rest of us mostly just talked about what to do next,” Hayward-Young recalls. “We did dwell on it a bit, but decided to focus on the future. It didn’t really shock me that he went, we kind of knew it was going to happen, but [new members] Tim and Yoann had been around as part of the touring band for a while. It made sense to bring them in, it wasn’t an overnight thing.”

“We wrote 50 songs for this album,” he continues. “It’s been interesting. Some people think the album is referencing blood and gore, because of the title. It’s not so literal. Internally, the whole thing has been like day and night.”

“There’s always a strange period after the album’s finished when you’re just sitting around. In an ideal world, we’d probably just put it out the next day and be done with it. You have to keep pushing yourself, though.”

“We did the first show the other day for the new record, and it was really exciting. When you come out and play those kinds of shows – this one had six new songs – you have to be careful. If you play the new stuff back to back, people will take it as an excuse to go to the bar. You can lose them. But you have to keep pushing yourself.”

“After the last record, we didn’t really know what we wanted to do, so it took a bit of time. We wanted to recapture that time back at the start, that creative, free spirit. We even thought about whether we actually needed a drummer for a little while before we settled on adding the new guys. Going back to our core just kind of naturally happened.”

“We learnt so much and grew up a lot writing the last record. It wasn’t an error, as such, but it did feel more like a fifth record than a third record. It was just eleven songs we love, rather than something more coherent. Like a chocolate box of songs.”

Combat Sports, then, is urgent rock and roll from NME’s former ‘Best New Band’. It’s a return to the buzz of ‘What Did You Expect From The Vaccines?’, but with eight years worth of touring and life experience piled on top, and a light step away from the sex and shenanigans themes that sat right at the very heart of the debut.

It’s well represented in the video for ‘I Can’t Quit’, in fact, footage that has all the chaos, sexuality and straightforwardness that has come to represent the Londoners. They’re ready, heart linked loosely to their sleeves, to rip a heap of memorable riffs through your summer.

The Vaccines fourth album ‘Combat Sports’ is out on March 30 on Columbia Records.