The trendy Danish concept of ‘hygge’ – a cosy, memorable, charming feeling of being utterly at ease – might have peaked as the big conceptual winter fashion, but it remains a wonderful concept. Here’s why a trip to the hills of South Wales is full of just the right kind of Hygge-like, cuddly charm…

Somewhere between Anglesea’s expansively named Llanfairpwllgwyngyll… (yes, we cut off two-thirds of the name, it is that long) and the Brecon Beacons National Park, you hit the winding hillside roads of Snowdonia. You cruise gently under tunnels of trees, the climate seemingly changing as you cross through each little hillside pass and rugged, three-house village. The land has that soggy green depth that feels like it hasn’t been dry in months, the texture reminiscent of an ancient realm of Hobbits. It’s the kind of place you almost drift through, giving re-emerging onto a dual carriageway the air of a post-dream slap around the face.

If Snowdonia is the realm of Hobbits, the Brecons feel more like they belong to the giants. The southern park is all expansive sweeping valleys, soaring hillsides and picture box villages that look unchanged in generations. They’re full of open spaces, their every building dwarfed by airy and enticing surrounds.

The main draw of the Brecons, then, is the scenery. In winter the slow rising roads lead you through tiny clusters of ageing houses, the pathways edging above the treelines until they burst out suddenly into great soaring valleys. They’re often spattered in shining snow barely hinted at a mile down the road, and stretching to distant but attainable peaks.

In the summer, this is a hiking hub. In winter you’d need to be more hardy to hit the upper slopes, but the delicate stone of the tiny towns comes into its own, lit up in slanting light and offering cosy corners next to fires to envelope guests.

Hay-On-Wye is one of the area’s more notable stop offs, and the place looks unchanged in decades. Tents pop up at weekends to expand the countless disorganised treasure-trove antique stores into the streets, while dozens of booksellers cram every spare inch with tomes, everything from first editions to scrappy paperbacks collected indoors and out, in more stores than a village could reasonably need.

There’s a regular vintage fair, where dozens of traders take root in every nook of the town, hawking anything from ships anchors and gemstone pendants to 1970s jigsaw puzzles, and doing so in the charmingly melodic local lilt from inside covered market squares and tiny lean-tos.

A light hint of what would be called ‘hipster’ if it were in a city of any size has crept in, too. It appears in bungled together stores selling plants down tiny alleyways, or eateries with retro themes, like The Old Electric Shop, a kind of living restaurant where much of what you see is for sale, the walls a scatterbrained and effortlessly charming, cobbled-together showroom.

Up in the hills, the outer walls of the Llanthony Priory in the Black Mountains give a taste of the isolation of this spot centuries ago. Only the thick stone outline of this spectacular 900-year-old building remain, and while there’s now a hotel right next door, it maintains the feel of a place that’s just faded away with the weather, its sense of grandeur peeking through the remnants. 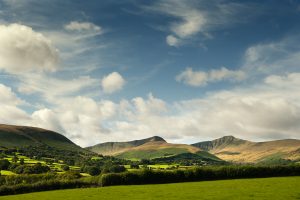 For somewhere to stop over, the award-winning Angel Hotel in Abergavenny delivers casual class. Tucked in behind a fairly innocuous looking facade is something of a community hub, bustling with activity. You can grab a tiny electric car to roam the hills in (provided on the house), or explore local artists in the hotel shop. It’s the social side of the hotel that stands out, though: it’s unobtrusively welcoming, popular as a conversation-driven night out as well as in its capacity as a hotel, with plenty of little corners in which to plant yourself.

Naturally, there’s also an oak-clad bars crammed with heady local brews, while the afternoon tea (a Tea Guild delicacy, no less, and a classy highlight in itself, featuring ample scones and pastries) and top-tier restaurant (crab, scallops and succulent local venison, as well as local beef and cheese) are both sublime. They’ve even opened an in-house bakery, specialising in delicate pastries and flavoured breads, and expanded the hotel outwards into various utterly luxurious buildings around its outskirts, including a wedding venue meets organic cafe.

You’re similarly treated in the hills, where many semi-rural restaurants – both walkers stop offs, and Sunday drive-tos for locals – have grown to produce some genuinely memorable food in fireside pub settings.

One, Felin Fach Griffin, went out of their way to accommodate our party’s severe food allergy issues, producing a gorgeous one-off bread cobbled together from unusual flours and vegan replacements. The unassuming gastro-pub meets hotel envelopes you in warmth as you stroll in, casual in its wooden pub decor, but opulent in its delicate servings of flavour-packed lamb, risotto and local sausage offered in front of a roaring fire.

In the town of Abergavenny itself – Brecons largest – a fairly bog-standard main street opens into a chunky shabby-chic market, while hilltops peak over the buildings in almost every direction, tugging at those exploratory heartstrings.

It’s all but inevitable you’ll find yourself on a summit somehow. Staring down into beautiful, slightly soggy fields that stretch from peak to peak feels like it reaches into the core of the identity of these effortless, slow-paced Welsh towns. The whole place gleams with a sense of pride and adventure. Bring your boots.

Ryanair fly (usually cheaply, though watch out for rugby weekends) to Cardiff, just over an hour from Abergavenny. Given its outstanding scenery and quirky stop offs, however, we far prefer making a day of it with the longer drive down from the Holyhead Ferry. If you’re hiring a car, it’s worth noting the evening ferry arrival isn’t much good (or at least you’ll need to stay in Holyhead overnight), as the car hire companies close their doors by six. They do, however, allow return trip drop-offs when they’re closed.

The Angel in Abergavenny is the kind of enticing rural hotel it would feel utterly opulent to lounge in for the weekend without ever passing the porch. That said, the many nearby hill walks give the place an air of ‘earnt luxury’, and add to the feel of the Welsh hotel of the year.

You can learn more about every aspect of the Brecon Beacons via the local tourism website at breconbeacons.org. A big thank you to Brecon Beacons Tourism for providing accommodation, meals and recommendations for this trip.

This article is a slightly extended version of a piece published in the Dublin Gazette in March 2018. View the original below:

A couple of my pics:

The coolest station in the world, Wales.

A bit of hillside ruin along the way