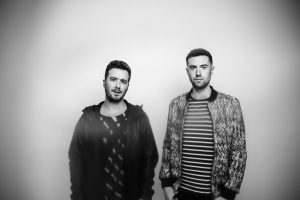 “The radio, the club night, they all contribute towards the brand,” Gibbon explains. “That’s building towards Kingdom, which is now both a brand and an album; it’s become part of our identity as a band as well as being a record, as linked in with the radio show as well.” The album version of Kingdom, in fact, has been on the horizon for quite some time, but it is now just around the corner.

“It’ll be out this year, probably late summer,” Gibbon tells us. “It’s almost a ‘best of’ compilation with some new bits, and it’s more song-based, like our first album. We’ll also be putting out more underground and club-friendly bits separately.”

Those two different identities shine through in the way the duo perform, too, and even feature in the touring style, which will see them DJ on one tour and head out live on the next. “It is very different,” Gibbon admits. “We do the live shows more in festival season, stuff like that. They are full-on live shows, with lots of instrumentation on stage, and we bring two different vocalists to perform the various different special guest slots.”

“That’s a difficult job, given there are so many different vocal styles on our tracks, but they do it really well. But the DJ sets (such as the one planned for Dublin) are far more underground than the live shows, and a good chance to present a load of the music we haven’t released.”

Dance music is currently in an interesting place generally, as Gibbon is not afraid to admit. The progressive closing of clubs in London is mirrored in Dublin. While our capital has never been a particularly outstanding clubbing heartland, for reasons varying from restrictive licensing laws to the dominance of competing pubs, gentrification around nightlife venues is a growing factor in our scene and London’s.

“It seems like it’s dying all over the country,” Gibbon says of UK clubbing. “We love Printworks [a new 6000 capacity London super-club], but too many clubs are turning into things like luxury apartments. A lot of places have closed over the last few years and that’s a real shame.”

As for the band’s future? “We’ll keep moving between the mainstream and the underground,” Gibbon says. “We’ll be back in Amnesia [Ibiza] this summer for another residence, and looking to release a load of different stuff, ours and other people’s. We’re in America, then around Europe in the next couple of months, and wé’re just back from Australia. It’s non-stop.”

Gorgon City play District 8 on Friday, March 28, with album ‘Kingdom’ due in the summer. You can listen to their regular radio slot at gorgoncity.com.