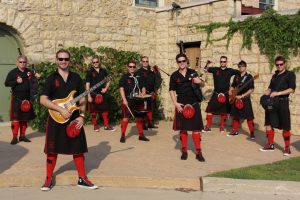 “We have won live act of the year twice now, and I think that’s a testament to the time and effort that’s been put in. Something else we do that not a lot of other bands in our position do is we come out and meet the audience after each show. It shows humility I think and lets the audiences know that we really appreciate them making the effort to come and see us.”

Naturally, touring as such a large group presents its difficulties, though, and with the Pipers playing regularly all over the world, it’s a notable logistical issue. 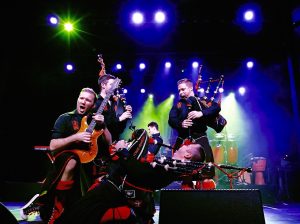 “It’s incredibly difficult,” Armstrong admits. “Thankfully we have Kevin [MacDonald, fellow bagpiper] who has a brain like a computer and is able to see the logistical big picture. There’s so much more to it than meets the eye. Getting all the visas arranged is a week’s worth of work alone. Then we have to find decent hotels and the means to transport around 14 people.”

“Obviously if we had less people on stage then more money could be made, but it’s really not about that. Imagine you went to see the Red Hot Chilli Pipers one year with the massive wall of sound coming at you and you went back to be faced with 6 guys. That’s just not going to work. We share rooms on tour, but we chop and change who shares with who as that way you don’t get stuck with a snorer for five weeks. You may laugh, but these things seriously start to make a difference after a while.”

As such a large group, we’re sure the tours contain some epic stories, though Armstrong is a little coy on the tour tales when we ask. Nevertheless, he comes out with this gem: “The ambient audience mics have proved problematic a few times. We recently played a show in Scotland and all we could pick up throughout the whole first half was a group of females on a hen night explaining to each other exactly what they wanted to do to us… In a nice way.”

There is the odd name-related mishap, though. “In America, we get some people buying tickets for our shows thinking its the Peppers. Not as many as you would probably think though. Perhaps ten per year.”

“Some realise they’ve made a mistake and come along anyway, because they research it and realise that perhaps we might not be that bad. One time we were playing at the Carpenter Centre in Long Beach and I met a couple dressed head to toe in tartan. Like stand out, head to toe including hats. It turns out that they thought they had bought Peppers tickets, and although they were offered a full refund they decided to embrace their mistake and get right into it. They’re now our biggest fans.”

As for picking those cover tracks, it’s harder than you might think. “We always try and make sure the traditional music comes first, and then we’ll go through literally hundreds of rock or pop tunes and see if there’s anything of merit that would fit. Our setlists are still about 60% trad tunes. The big difficulty is that the bagpipes only have one octave, so there’s a lot to think about. During sound checks or rehearsals one of the guys will come in with an idea, normally he’ll have the charts written out for the rhythm section and we’ll give it a go. You get the feeling straight away whether it’s going to work or not.”

“The overwhelming reaction we get is that people will say they never knew bagpipes could sound like that, and I’m incredibly proud of that. It’s such an emotive instrument when played well,” Armstrong concludes. “I’m still not sure that part of it has been explored as thoroughly as it could be.”