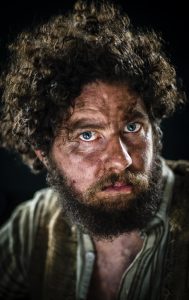 Sat somewhere in the realm where storytelling and music meet, Dubliner Declan O’Rourke has spent more than a decade researching his latest offering. It may just be his magnum opus.

Declan O’Rourke is not your typical modern-day musician. Having powered onto the Irish music scene in 2004 with debut ‘Since Kyabram’, he became a radioplay mainstay with hit single ‘Galileo (Someone Like You)’.

After touring with Bob Dylan and Snow Patrol, though, O’Rourke was not to be lured by the temptation to repeat the same trick. Instead, he’s stood a million miles from pop tropes, writing on the workhouses his grandfather worked in, or ruminating on arranged marriages. At times, he’s had the RTE Concert Orchestra on board. At others, his music has been beautifully toned-down and delicate.

This latest release, ‘Chronicles of the Great Irish Famine’, is the result of sixteen years of research into the untold stories of the 1840s, a passion product that’s been a rumbling constant in the background of O’Rourke’s entire career so far.

“It just took that long to research,” O’Rourke tells the Gazette of the chunk of his life dedicated to this album. “It needed that. Regular songs come and go, but when you’re dealing with something where the material is based on information that you have to find, there are mountains and mountains to wade through.”

“What I was looking for was personal stories. There’s a lot of legislative information and political background about the famine, but the personal accounts are few and far between. Most of Ireland’s poor were illiterate at the time. Then there was the phenomenon of not talking about it afterwards. Stories that were passed down just kind of died out.”

So O’Rourke dug in, searching out tales from every corner. “If you keep going through books, you eventually find voices and stories,” he explains. “Then it’s about finding the best ones to get an overview of things, and paint different sides of what happened. Part of it was also about making sure I didn’t miss out any really important bits. I’m not an avid reader, so it was laborious. The crafting of the songs themselves wasn’t so hard, but because of the academic nature, you’re second guessing yourself to make sure you’ve got it right.”

“It gave me a chance to explore the kind of music I was raised on, and that I loved from a very early age. It was all trad and folk songs for me back then, and nearly all of that is based on songs that have been around forever. I’m a writer, so it was a chance to connect with that and still write.” 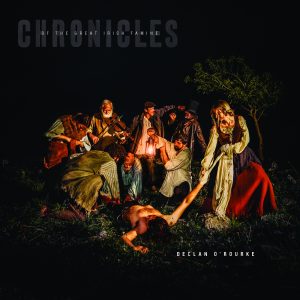 The depth of exploration that went into ‘Chronicles of the Great Famine’ meant O’Rourke uncovered ample stories that are far from widely known, and plenty that are genuinely astonishing.

The story of Curry Shaw, for example, is a gem that stands out on the album. 23-year-old Shaw fled his ship ‘Hannah’ with two crewmates aboard the only lifeboat, after he’d struck an iceberg in a storm off Canada in 1849. His actions left at least 48 Irish immigrants to die in the water or on the ice. Shaw also tried to force the ship’s hatch closed with most of those on board below deck, to prevent the passengers from following him.

“One of my best friends, a guy that I lived with in Australia for years, he told that story to me,” O’Rourke explains. “His wife is a relative of someone who was on that ship. It only emerged around 2005. I mean it was probably known originally and forgotten, but it really came out again a few years ago.”

“A lot of people left a small community in Armagh that was known as Forkhill. They were arriving in a place in Canada that became known as little Forkhill, because so many of them were there.”

“There was a documentary crew that went looking for that story in 2005/ 2006, and looking for ancestors, and they found my friends wife. He rang me up and told me the story. He knew I was writing about the famine. You get a lot of people coming up to you and telling you stuff. It’s less often you get a good one, but I was chuffed with that, as it’s a really great one with a personal connection.”

Stories landing in O’Rourke’s lap certainly wasn’t the norm. “Nearly the entire system of records from back then is gone,” he explains. “You can go back to the 1901 census, and before that it’s very sparse. Parish records are a new world to explore. I couldn’t really find anything about my own past, but the thing that sparked this whole thing was that my grandad, who was born in 1916, worked in a workhouse.”

“I didn’t know what that meant, but I was kind of determined to find out. A book jumped out at me in Easons a couple of months after I heard about my grandad’s job. I picked it up in the bargain bin, and got on the bus and read about it. From the first page, I realised the connection, that the workhouses were built for the famine. It made the hair stand up on my neck. They’re very moving stories. Whatever that bone is that’s tickled as an artist, I just wanted to write about it straight away.”

“I found so much that I realised that one song wasn’t going to do it,” O’Rourke said of his journey, one of rare depth and beauty. “I’ve learnt over the years that I’m no good at putting together things that other people like,” he concludes, “So I just do what I like.” The rest, in more than one way, is history.

Chronicles of the Great Famine is in shops from October 27. Declan O’Rourke plays Dublin’s Vicar Street on December 14 as part of an eleven-date December tour of Ireland.