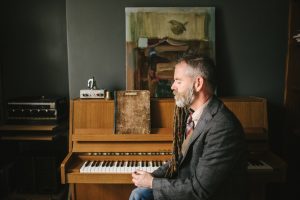 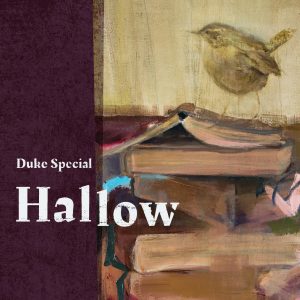 “I’ve always wanted to give people a way into what I’m singing about,” he explains. “They can make of it what they will – I don’t want to be one of those singers who explains songs, because it means something different to different people – but I do want people to connect with the topics, be they a Paul Auster novel, a play, or a selection of old photographs from the 1800s [all of which are previous subjects of Duke Special albums]. I like that the meaning might not be so in your face.”

“I have a little theatre background,” he admits. “On stage, I become an amplified version of myself. I embrace it, using props and playing with how I look. You’re always aware you’re on stage, but there’s no point in going up and being self-aware.”

“I probably used to be a lot happier on stage, though. I used to do long stretches, six months at a time on tour sometimes. Life has changed a bit, and I don’t really want to do that anymore. In fact, if I could just play in Belfast over and over again for a year, I’d probably do that, to be honest. Performing is a real chance to express yourself, though, and I do love to do that. I’m just not so in love with the actual travel and touring part anymore. I have things waiting for me at home, you know?”

‘Hallow’ was produced through crowdfunding, with those who supported the album earlier this year getting a unique copy that will never reach the shops. Wilson describes the experience – which included creating his own crowdfunding website – as “humbling. It gives me faith to go and do it. I’ve been around for enough time now that people who like me know what I do, and that I like to explore.”

“I couldn’t go all in and do the Patreon style thing, as it just seems to require so many constant updates and constantly producing stuff, which is not really how I want to work. For me, there’s a little bit too much ownership being given there. But this felt really free, it allowed me to do the artistic thing that I wanted to do.”

In truth, Duke Special doesn’t fit naturally into the Irish music scene. He totally eschews current fashions – something that’s always been more of a positive than trying to adapt to them – and has a wonderful habit of making much from the pieces of art that absorb him. He tends to sing in fantastically phrased near-riddles that just ooze inventive songwriting.

“Some people write in their heads,” he concludes. “I’m inspired by other things.”

Hallow is out on Friday, October 6, while Duke Special plays Draíocht Arts Centre, Blanchardstown on October 14 as part of his Irish tour.