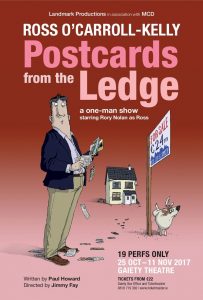 “The characters have a lot of heart. Otherwise, you’re just watching a guy meandering his way through life. It’s great fun. It can be quite overwhelming, the intensity of it all, too.”

Howard, of course, is key to the play. The prolific writer has now portrayed the cult icon in no less than 17 different novels (and a couple of spin-offs), and it’s proven an enduring satire. Naturally, he’s close to the play, too.

“Paul is so generous with his work’ Nolan explains. “This is a world that he’s created. He has great material, and he’s so completely generous and collaborative with it all. I can’t tell you what a treat is to sit down and read the script for the first time. I was on the bus reading it through, and I had tears streaming down my face trying not to laugh. I’m sure people thought I was having a fit. What’s amazing about it is there’s always stuff in his scripts that you play without knowing how funny it is. It’s a joy for an actor”

“I’m a born and bred south county Dubliner,” Nolan says of his ongoing role. “My accent isn’t that far away. I didn’t have the same upbringing as Ross by a long shot, but I went to a rugby playing school. Then I went to UCD, and I always feel like going there was like being on an observation deck for this, unknowingly. Being able to observe that kind of thing has helped me channel it. I’ve got friends with certain mannerisms that I find make their way into performances. I’ve been playing the character for ten years, though, so it’s almost second nature. People don’t want it too exaggerated, or too real. It’s got to be a comfortable middle ground.”

So what about this particular play – how will it work as a solo act?

“Little things happen through the evening, like a phone call or two, that turn things on their head,” Nolan tells us. “Ross is going through a bit of a change. He’s definitely not going to play for Ireland. Or is he? Come down, have a Heino and find out! It’s really really funny, but there’s a huge amount of heart. It’s a journey of self-discovery as much as anything else. We hope and pray that by the end of the show, he’ll be a different man to when he started out. You’ll come in knowing one Ross, and perhaps leave knowing another.”

“We started with ‘Between Foxrock and a Hard Place’ ten years ago, in the last days of the Celtic Tiger. Every time I step into the Dubes, there’ s a certain amount of pressure that comes with the role. People have a certain ownership over the character, and want him to be a certain way. The best compliments we ever get from doing all the shows are that it’s how people imagined it.”

Postcards From The Ledge runs at the Gaiety Theatre from October 22 to November 11, with tickets (on sale now) starting at €22.