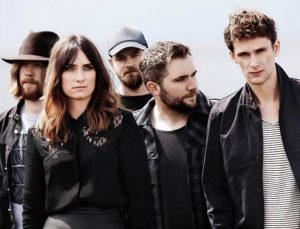 ‘Speeding Cars’, strangely as the band’s biggest hit, almost didn’t make last year’s debut album ‘Everything This Way’, as singer Sheehy was less than sure about the track.

“We always knew it had something,” he recalls, “but it was much slower, and I was kind of sick of it. I did suggest leaving it out, but the producer disagreed – it was his favourite track, in fact – and that was that. The rest of the band liked it, too. It turned out it was the one. It didn’t really come together until we were in the studio, basically, the guitar went through this big evolution in the studio, and then it came together.”

The studio, in fact, was never easy. “The songs kind of evolve like that, almost like a warzone, with each of us pulling backwards and forwards. But if someone feels really strongly about something we’ll always give it a chance. By the time we go out on stage all that’s done, and we just go out and enjoy.”

“We heard a really great one about how Oasis slow their songs down, because of how long they take to get to the back of their crowds, which I thought was great,” Sheehy recalls. “But we don’t really think like that. We just do our thing and hope people like it.”

The opportunities will keep coming, undoubtedly, with a major label backing the five-piece, and a sizeable fanbase building. “We weren’t really looking for a label when Virgin came along,” Sheehy recalls. “We were only willing to get involved with someone who would accentuate what we were doing. There’s not really the same need for labels that there was in the old days, you can do a lot yourself.”

“But Virgin liked what we were doing, and we’ve only had good experiences with them. They believed in what we were doing, and just told us to keep on doing it, so they’ve been really supportive. I suppose it was easier because we were getting radio play and selling out tours across Ireland before they came along, and so they could see that it was working.”

It certainly has worked: ‘Everything This Way’ went to number one in Ireland, and has now gone platinum. It also sold close to 100,000 copies in Germany. The Dingle act’s 2017 tour schedule has included – on top of our encounter in the Czech Republic – stop offs in Dubai, Belgium, Switzerland, Norway, and Holland, as well as extensive trips around the UK and Ireland.

As for the future? “We’re in the middle of writing our new album,” Durham reveals. “We do festivals at the weekend and work on the album during the week, and we really can’t wait to get it out there. We’re already playing a few new songs, so it’s coming.” So, we suspect, is a whole lot more.