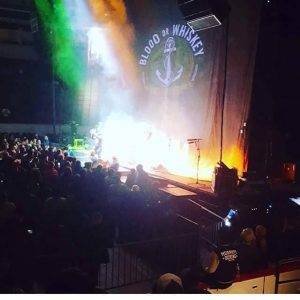 Mulhooly adds that it can be quite a limitation: Blood Or Whiskey could certainly have more than four albums out under different circumstances. “We have a lot of songs there, but we’re not a great recording band anyway, to be honest,” he admits. “We’re a live act. If we could get a producer who could capture the energy we have live, that’d be perfect. It’s very hard to capture that energy playing to a click track, as you normally do when you’re recording. I’d love to just put mics around each instrument and lash it out, like we do in practise, and then just touch it up.”

There is, undoubtedly, a certain amount of sneering towards trad-fusion acts in corners of Ireland. O’Meara and Mulhooly pick out Clare as a place that’s particularly superior about the purity of their music, and thank a notable Dublin act for their help on that particular front.

“When we’re writing songs, we don’t write them because we’re a Celtic punk band. We write as a standard punk band, and then we add in the banjo the whistles, all that. We’ve squeezed banjo into songs that had no business having banjo in them, truth be told. But we’ve learnt from it, and now we’ll do what the hell we want.”

“We used to play trad in our local GAA club, for footballers or hurlers, just basically for a piss up. We’d come up and have a right old session, and play with some trad heads. But they weren’t snobby, we were just playing rebel songs. The Pogues dealt with the snobbiness around trad music thirty years ago.”

“There’s an interview from RTE with Shane [MacGowan] just being asked endlessly about it not being Irish. He just laughs it off. It’s a big celebration of being from Ireland, and we’ve nothing but respect for it. You’ll always get snobbiness, we’ve gone through the mill on how we’ve felt about it, but everyone can do what they want. It’s up to us. Music was never meant to have boundaries.”

At one point, though, it was definitely a bit of a party. “Back in the day, we played gigs and treated tours as holidays,” O’Meara says. “We’ve learnt, but we were young. It’s a completely different, more professional setup now. You can drink in your own time; we’ve realised there’s something in it for us now. It becomes very difficult to play when you’re partying every night.”

As for making some noise in Dublin? “If you play less regularly, you’ve a better chance of getting a good crowd in. What we’d really like to do is set up a regular Christmas or Easter show. That’s kind of the plan. We’re also thinking about bringing it back to the pubs, with more of a party, session kind of vibe. We’d like that to grow into something.” Maybe it will. Meanwhile, the American tour offers pour in.