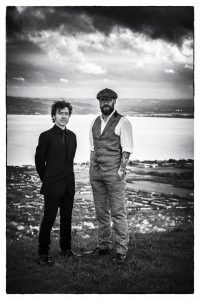 “There’s too much bullshit in life and music, and people don’t like to talk about the real stuff,” he adds. “I’ve been doing this since I was 15, essentially as a professional. That’s how old I was the first time a label approached a band I was in, and you do start to see it. What I do now is a better path for me.”

“One of the biggest pop stars in the world is small, ginger and carries just an acoustic guitar,” he adds jokingly. “Admittedly, that’s probably where my similarities to Ed Sheeran end.”

Wright’s latest project is entitled ‘The Tragedy of Dr Hannigan’, a collaboration with another Belfast native called Dean Stevens, with the first single ‘Hey Little Worried One’ emerging last week. It’s a charming, scatty folk ditty, a style that’s become something of a theme for latter-day Wright material.

Wright describes the collaboration as “from a place of deep connection.” He’s known Stevens for over a decade, and describes him as “not prepared to let ‘the scene’ dictate what he is or what he does. He’s really true to himself, and doesn’t fit neatly into any musical niche. It’s great, a lot of my music is about being able to express yourself in any way at all.”

“I’m not really singing as me,” Wright explains, defining the style as “twistedly optimistic pop”. “I go into character. The character is the man who stands behind you when you look in the mirror, staring over your shoulder and forcing you to doubt yourself. He’s the man who stops you making an important phone call because you don’t know what to say. I guess it’s me purging myself, looking at my doubts and saying the stuff I wouldn’t say in everyday conversation.”

There’s another VerseChorusVerse album on the way, too, Wright’s third, and as expected it’s profoundly inventive. “It’s the best thing I’ve done,” Wright explains, before stopping to apologise for blowing his own trumpet. “I’m just really happy with it, but I’ve also written a book about my travels across America to release with it. Ideally, I’ll put them out together. It’s kind of memoir ish, but about a very specific time.”

“A lot of what I do is very much about my life. I guess I’m a kind of nomad character in my own head,” Wright explains. “A lot of my songs are stories.”

The book – about a journey involving a record label and a storied journey between several big American cities – is a story for another day, and given his track record, one we’ve little doubt that Wright will produce..

Wright’s music, though, is for right now: he’s a man who gave up a lot to follow his heart, scraping by, but more himself in the process. His heart is in his melody.