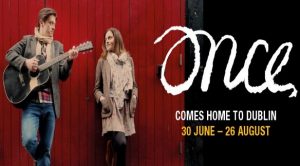 The all-conquering musical returns to Dublin for a new run, complete with its first ever all-Irish cast

HAVING BEEN A hit movie and a startlingly successful Broadway show, Once’s return to what seems its spiritual home – the Olympia Theatre in Dublin – is a big one, especially with much of the cast renewed, and what’s become a big, global name to live up to.

Once is both unique, and uniquely Irish. With the lead characters played by Glen Hansard and Marketa Irglova in the hit movie version, the play riffs off a similar theme, taking music from the city’s streets and capturing its textures and nuance on stage. There are some subtle touches: an on-stage bar; the ‘non-acting’ role of the characters in providing musical entertainment before the main performance gets underway, and a relatively unscripted style that makes no two performances quite the same.

Phelim Drew – who’s featured in movies including The Commitments, Angela’s Ashes and King Arthur – has a lifelong connection with Irish music through his father, Dubliners star Ronnie Drew. He’s long since established as a name in his own right, however, and the return of Once this summer also marks his return to the role of Billy.

“It’s a different cast – an all Irish one – and the chemistry has changed considerably,” Drew told the Gazette as rehearsals for the latest run got underway. “Six new people means a very fresh start, and they’re all amazing musicians and actors, so we’re flying through it. Brian Gilligan who’s playing Guy has a lovely quality in that role, which is great. It’s a difficult play to cast, because a lot of the cast – as well  as being really stand out actors – have to be great singers and guitar players, and it’s difficult to tick all those boxes. That makes Once special in its own way; this time around we have a really great cast.”

“Glen [Hansard] is the embodiment of someone who has worked so hard to get from the streets of Dublin to being idolised abroad,” Drew says of The Frames man’s role in the production, with Hansard having starred in the hit movie. “I went to see him play in Vicar Street recently and it was just stunning. It’s hard to produce something of that quality, but we’re doing everything we can to emulate it.”

Drew himself has a long history with the Olympia, with The Dubliners having traditionally played at the venue once a year for a large part of their career, and naturally, Phelim regularly in the audience.

“I’ve played on most Dublin theatre stages over the years, but it’s always highly emotional on stage at the Olympia,” he explains. “Singing ‘The Auld Triangle’ with Glen [Hansard] after Once last time around was really special. I used to go in as a child every summer, when my dad played the big summer shows, and even got to know the staff, some of whom are still there. So it really means something to me.” 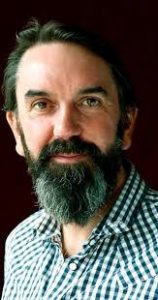 “There’s not as much pressure on the rehearsals for me this time around,” Drew goes on to admit. “There’s never as much pressure with the basics like getting the lines when you’ve done a show before. Last year there was an American director doing it who really wanted to re-examine the play, and that brought its own pressures. It can be hard to forget the previous times. Des Kennedy, who’s directing this time around, makes it feel comfortable, happy and makes us feel released as actors despite the obvious pressure to get things right.”

“There’s this incredible repertoire of songs to learn, about 20, plus three more to do before the show every night, and those three don’t stay the same. It’s quite a big undertaking, and there are no real shortcuts.”

Speaking of one of the show’s most playful quirk, the on-stage bar, Drew outlines how it fits into the feel of the play: “It’s like walking into a Temple Bar pub, it really mimics that atmosphere,” he explains. “It really eases us and the audience into the show, and people just accept it. It’s like watching a good film, you forget you’re watching a movie and suspend your disbelief. People can be a bit blown away but they’ve been very generous and giving in terms of space and enjoyment with the bar.”

On his own return, Drew says “I’ve been lucky, having one good project after another. Ireland being Ireland, for actors, stage is your bread and butter, and while I’ve done a bit of film and TV, it’s a different kind of thing. I’m a freelance actor, and such as it is, you’re very rarely in a position to choose your projects; you’re lucky enough to be cast, very few actors have any power over what they actually do. If you like what you’re doing, that’s normally a bonus. So I’m very lucky to get roles like this that I do really enjoy.”

On his own role, Drew describes his character Billy as “obsessive and nerdy, he seems like the kind of guy who in owning a music shop, might know the serial number of every instrument. I’m not very nerdy, but like him, I’m a definitely quite unhinged. He doesn’t give up, and he has a big heart.”

“Our role, ultimately, is to communicate stories to an audience,” Drew concludes. “Whether they’re American, Chinese or Irish, you can feel when an audience is with you, you get that dynamic on the stage. That’s when things really shine through. Without the audience, you don’t have that connection.”